At around midday Saturday, hundreds of supporters of Turkey's pro-Kurdish People's Democratic Party (HDP) rushed the border fences near the Mursitpinar crossing. 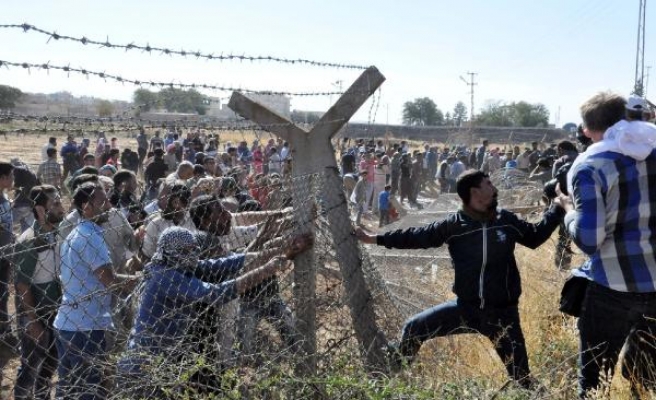 Hundreds of Kurds in Turkey's south-eastern border with Syria have attempted to break across the fences to enter the besieged town of Kobani.

Around 150,000 Syrian Kurds from the border town of Kobani have been forced to flee to Turkey to escape a siege by ISIL fighters, who have reportedly taken around 70% of the surrounding area.

While Kurdish civilians seek refuge within the safety of Turkey's borders, hundreds of armed PKK rebels in Turkey have been trying to enter Syria to help their fellow Kurdish YPG rebels fight off the ISIL onslaught.

It has been reported that some 300 PKK rebels succeeded in entering Syria last week, responding to a call made by jailed leader Abdullah Ocalan, but since then Turkey has increased security along the border to prevent unauthorized crossings.

However, at around midday Saturday, hundreds of supporters of Turkey's pro-Kurdish People's Democratic Party (HDP) rushed the border fences near the Mursitpinar crossing.

Hundreds of Turkish police and armoured vehicles were quickly sent to the scene after the group managed to breach the wire fences, firing tear gas to disperse crowds on both sides of the border.

Some who had managed to jump the fence and enter Kobani were denied entry to Turkey when they tried to return an hour later, as border guards directed them to the Mursitpinar crossing.

However, reports say that some who had managed to cross into Syria from Turkey are still in Kobani.

One of the mortars blew a large hole in an empty minibus parked near Tavsanli, a village close to Kobane.

Authorities in the border province of Sanliurfa have blocked the main road to the Syrian border as security worsens in the area, an official at the local governor's office said.

ISIL launched a fresh offensive to try to capture Kobani more than a week ago after months of fighting.

The Turkish province of Suruc, which is only 10 kilometers from the Syrian border, has been transformed with the sudden and unprecedented refugee influx over the last week.

Although many of those fleeing the Syrian conflict are members of extended Kurdish families which straddle the border, many others have forced into living in harsh conditions as they fill mosques, parks and storehouses in the Turkish town.