At least 100 people are arriving from Iraq each day, many of them smuggled across the border by locals, sometimes paying up to $1,000 per family. 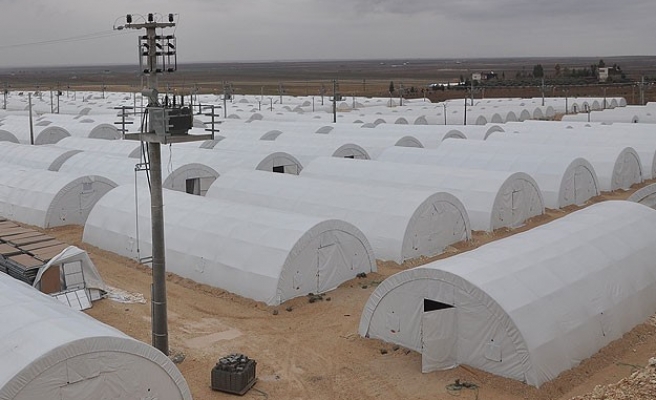 Sewra was terrified of being caught by Turkish soldiers as she, her children and grandchildren inched their way through Iraq's mountainous border region, fleeing a militant onslaught by cover of darkness.

The 56-year-old and her family, among tens of thousands of Yazidis uprooted by ISIL militants, paid $500 to an Iraqi man with relatives in Turkey who said he could get them over the border to safety without passports or visas.

"If they'd caught us and tried to send us back to Iraq, I would have killed myself," Sewra said, sheltering from the sun under a makeshift tent in a refugee camp in the Turkish town of Silopi, a stone's throw from the border.

"Iraq is finished for us, there's no going back."

Yazidis like Sewra, followers of an ancient religion derived from Zoroastrianism, fled their homeland in the Sinjar mountains as Sunni militants, who see them as devil worshippers, seized towns and carried out mass killings this month.

Local municipality workers running the camp in Silopi just over the Turkish border say 1,500 people are sheltering there alone. A new facility with a capacity of 5,000 is being built nearby to cope with the continuing influx.

At least 100 people are arriving from Iraq each day, the camp workers say, many of them, like Sewra, smuggled across the border by locals, sometimes paying up to $1,000 per family.

"This may look like business to you but it's actually charitable work," said a Kurdish van driver who gave his name as Cudi and said he regularly brought Yazidis from Iraq.

"They have no visa, no passport. They live in awful conditions in Iraq. Should I just ignore them," he said, declining to give his full name because what he is doing is illegal.

Turkey, already sheltering more than a million refugees from the war in neighbouring Syria, has reiterated that it will maintain an 'open door policy' to those fleeing violence, although customs officials at the main Habur border crossing with Iraq are only allowing in those with passports.

The Yazidis are part of Iraq's Kurdish minority and some have crossed into Turkey under the protection of the Kurdistan Workers Party (PKK) militant group, which fought a three-decade insurgency against the Turkish state and is considered a terrorist group by Ankara, the United States and European Union.

PKK fighters have rushed to the assistance of Kurdish peshmerga forces battling the advance of ISIL militants, playing a decisive role in blunting their sweep through Iraq.

When the peshmerga withdrew, overwhelmed, and left Yazidi towns defenceless against the advancing ISIL fighters, it was PKK and its armed sister group - People's Defence Units (YPG) - which came to the rescue, refugees said.

The camp in Silopi has regular food and water supplies and is partly made up of two-storey concrete buildings being used as shelters for the refugees against the blistering summer heat.

The camp is officially run by the HDP municipality but PKK members are responsible for security, as well as the provision of basic utilities like water, local residents say. Officials at the camp did not want to be interviewed.

The local authorities are building another camp nearby with the capacity to accommodate 5,000 people, which they expect to be ready in the next few days.

"We will be bringing the thousands of people in Uludere to here," Seyda Urper, an engineer for the municipality, said at the site, referring to a predominantly Kurdish border town through which many Yazidis have crossed.

About 120 km (75 miles) to the west, in the predominantly Christian town of Midyat, already home to a wave of Syrian refugees, Turkey's disaster management agency AFAD is sheltering around 1,500 Yadizis in one of its camps.

The agency is also working across the border in northern Iraq to set up two separate camps for Yazidis and Turkmens, Iraq's third largest ethnic group after Arabs and Kurds, who have close cultural and linguistic links with Turkey.