Transport Minister Yildirim says section of Istanbul's third airport will open in February 2018, while city's new bridge to open in August this year 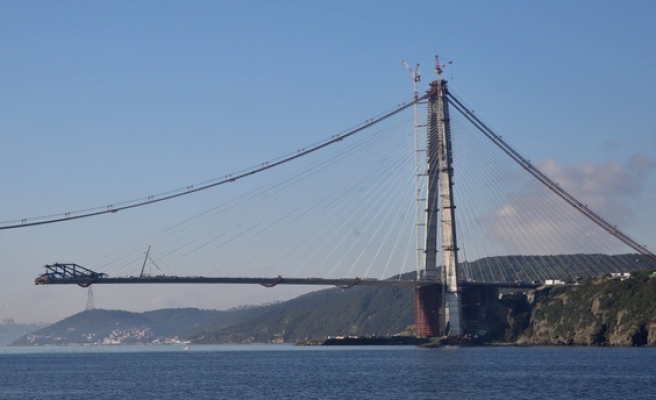 A section of Istanbul’s third airport will open in February 2018, while the port city’s third bridge is all set to open in August, Turkish transport minister said Wednesday.

In remarks made during Anadolu Agency Editors’ Desk in Ankara, Turkish Transport, Maritime and Communication Minister Binali Yildirim said: “The section of the new airport will cost €10.3 billion and have the capacity to host 90 million passengers annually.”

The Cengiz-Kolin-Limak-Mapa-Kalyon consortium, a joint venture of Turkish companies, won a tender to build the third airport in Istanbul in 2013, which promises to pay the government €22.1 billion for 25 years starting from 2017.

Boasting a 150-million passenger annual capacity, the airport is expected to become one of the biggest in the world and the biggest air transfer hub in Europe.​ The airport will also act as a focal point for Turkey's flag carrier Turkish Airlines, which is one of the fastest growing airline companies in the world, flying currently to over more than 200 international destinations.

Yildirim also said that Istanbul's third bridge is all set to open in August. “The bridge’s silhouette will appear in five to 10 days and it will be ready along with link roads by August,” Yildirim announced.

About access to finance in Turkey becoming more difficult lately compared with developed countries, Yildirim said: “I do not think the country’s mega projects would be affected negatively. On external financing, the public-private partnership continues to be attractive in the country.”

About the Syrian conflict, the minister said: "Unfortunately, it is obvious Russia [and] the U.S. tacitly agreed on some subjects in Syria.

“Turkey is showing the best example of to the world [by hosting and taking care of] nearly three million refugees,” the minister added.

A conflict has been raging in Syria since early 2011, which has led to the deaths of more than 250,000 people and driven more than 10 million from their homes, according to the UN. Turkey hosts more than 2.5 million of them.