49 Turkish hostages who have been held by ISIL in Iraq’s Mosul city have been freed and brought back to Turkey Saturday morning. 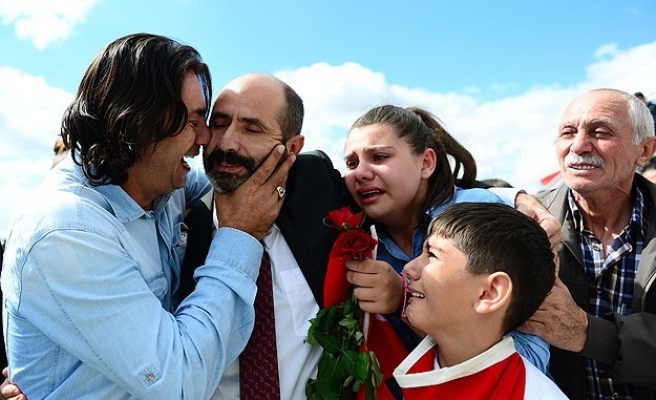 49 Turkish hostages who were held in Mosul by ISIL more than 3 months have been released early Saturday.

Turkish Prime Minister Ahmet Davutoglu said that 49 Turkish hostages who have been held by ISIL in Iraq’s Mosul city have been freed and brought back to Turkey Saturday morning.

“They came to Turkey at 5 a.m. in the morning. We followed the developments closely all night… This happy development prepared us for a beautiful morning…I am very proud to share this happy news”, Turkish PM told cameras in Baku where he was visiting.

Davutoglu said the freed citizens have crossed the border at about 5:00 a.m. Turkish time and they were being taken to southern Turkish city of Sanliurfa and thanked Turkish intelligence agency for the happy development.

"This was a procedure carried out through MIT's own methods. This work had intensified in recent days," he said in comments broadcast by Turkey's state-run TRT television.

Davutoglu cut short his Azerbaijan visit to meet the hostages at the GAP Airport in Turkey’s southeastern province of Sanliurfa.

Davutoglu and the freed hostages boarded a flight to the capital, Ankara, where they landed at the Esenboga Airport at11:30 a.m. local time.

Speaking from an open-top bus at Ankara’s Esenboga airport on Saturday, Ahmet Davutoglu told the jubilant throng that Turks had “deeply felt the pain of a separation and the fear of what will happen next.”

Addressing the international community, he highlighted Turkey’s role in taking in refugees from Syria and Iraq, regardless of religion or race.

He said: “As a powerful state we have brought our brothers here. However, the ones who cannot go back to their homeland and their homes… about one and a half million Syrian refugee brothers… the Arabs, Turkmen, Kurds, Yazidis, Christians, all our friends and brothers, who will look after them? This is the time to take care of them. This is the time to look after those orphans.”

The release on Saturday of 49 Turkish hostages was part of a "pre-planned operation" by Turkish intelligence, President Recep Tayyip Erdogan said in a statement cited by broadcaster NTV.

Erdogan said in a statement regarding the freed hostages: "I thank the prime minister and his colleagues for the pre-planned, carefully calculated and secretly-conducted operation throughout the night."

"MIT (the Turkish intelligence agency) has followed the situation very sensitively and patiently since the beginning and, as a result, conducted a successful rescue operation," he added.

There were no clashes with the militants during an operation to free the hostages, nor was any ransom paid, NTV reported.

Without citing its sources, it said MIT had tracked the hostages as they were moved to eight different locations during their 101 days in captivity.

A source told Turkish daily Hurriyet there were at least five opportunities to free the hostages, but escalating clashes in the region ruled out the possibility of freeing them sooner.

The last intelligence operation started a few days ago but the ISIL did not want to hand over the hostages due to problems stemming from their current battle with Kurdish YPG militants along the Turkish border.

The captives were eventually brought to Tel Abyad, a Syrian town opposite the Turkish town of Akcakale, before being handed over to the Turkish authorities, Hurriyet reported.

The 49 Turkish citizens - including diplomats, consular officials and their families - were kidnapped from the Mosul consulate on June 11, a day after ISIL took control of Iraq's second-largest city.

Turkey's consul-general to Mosul, rescued after 101 days in ISIL captivity, refused to read a message for his captors “despite having a gun put to his head,” another hostage revealed.

Speaking to the media at Ankara’s Esenboga airport following his and the other 45 captives rescue on Saturday, Alptekin Esirgun said: "We knew that we had to stay patiently there. There were times when we faced death but we supported each other."

Esirgun described how Consul-General Ozturk Yilmaz refused to read a message on behalf of Turkey that had been prepared by the terrorists even though he was threatened with a gun.

Paying tribute to Yilmaz, he added: "We managed the process very well. I am thankful to him.”

"All I want to do now is to go home with my family," he said.

Asked if he gave in to despair during his captivity, Yilmaz replied: "A believer never thinks about despair. When you believe, the light of hope never dies."