NATO's Rasmussen calls for release of Turks held in Iraq

"We want to see all of the Turkish hostages released and we want to see them safe," NATO Secretary-General Anders Fogh Rasmussen said. 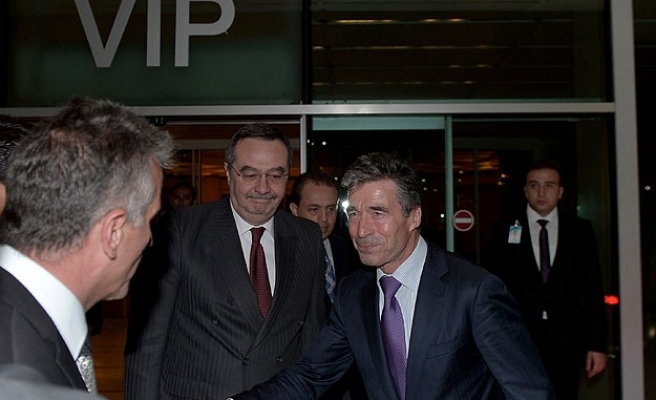 NATO Secretary-General Anders Fogh Rasmussen called on Monday for the immediate release of Turkish diplomatic and security staff held by insurgents in the northern Iraqi city of Mosul.

Fighters from the Islamic State in Iraq and the Levant (ISIL) kidnapped 49 Turks, including special forces soldiers, diplomats and children, from the Turkish consulate on Wednesday as they overran Mosul.

"We follow the dangerous developments in Iraq with great concern. I condemn the unacceptable attack on the consulate general in Mosul," Rasmussen said during a visit to Ankara, standing beside Turkish Foreign Minister Ahmet Davutoglu.

The ISIL offensive threatens to dismember Iraq and leaves Turkey, a NATO member, facing a widening insurgency in two of its southern neighbours, with ISIL also making territorial gains in Syria near the Turkish border.

Ankara has the second largest armed forces in the NATO military alliance after the United States. It is hosting six NATO Patriot missile batteries meant to defend it against any attacks from Syria.

The diplomats and soldiers trapped inside the Mosul consulate had no option but to surrender after hundreds of heavily armed rebels surrounded the building, the Foreign Ministry said on Saturday.

Prime Minister Tayyip Erdogan has said the hostages are unharmed and that all efforts are being made to secure their release, as well as a second group of 31 Turkish truck drivers also captured by ISIL last week.

The talks focused on the situation in Afghanistan and Ukraine - where pro-Russian separatist movements pose a danger to the country's unity, sources close to Prime Ministry said.

Rasmussen also thanked Turkey for its contribution to NATO's ISAF mission in Afghanistan.

A statement from official presidency website said Rasmussen also informed Gul about the main issues to be discussed in a NATO summit in Wales in September, while the duo also talked about developments in Iraq, Syria, Ukraine and Afghanistan. The meeting was closed to press.