After the introduction of the new system, the issue of how this new system would be implemented at schools became a hot topic in Turkey. 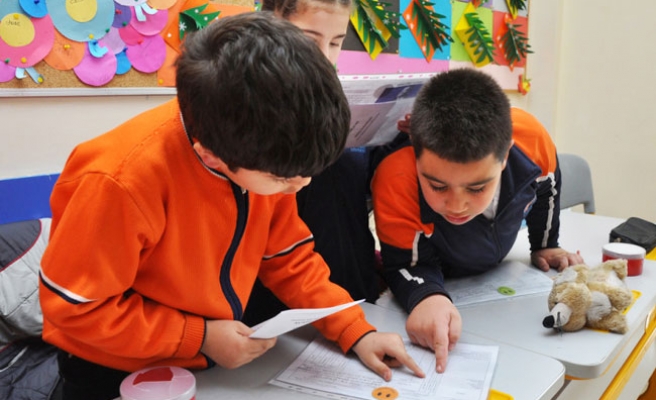 The curriculum recently introduced for a the new education system, popularly known as the “4+4+4” system, puts the burden on the shoulders of primary school teachers, mainly first grade teachers, educators point out.

The new curriculum was released on Wednesday with approximately two weeks to go before the start of the 2012-2013 school year, which is scheduled to start on Sept. 17 for all primary, middle and high school students, with the exception of first graders, who will start on Sept. 10. The curriculum was announced by the Ministry of Education's Board of Education and Discipline, on its website.

The recent education law increased the duration of compulsory education from an uninterrupted eight years to 12 years, dividing it into three four-year stages -- primary school, middle school and high school. It is popularly known as the 4+4+4 education law.

After the introduction of the new system, the issue of how this new system would be implemented at schools became a hot topic in Turkey. Many education experts, teachers and education unions have expressed their concerns about the implementation of the new system ever since the system was first announced. As the enrollment of children who reach 66 months of age in primary school has now become mandatory, the type of curriculum that would be prepared for first graders has been the subject of the most amount of speculation. Children who turn 60 months will also be able to register in primary school with the consent of their parents.

According to the curriculum released for first graders, whose ages are expected to vary between 60 and 82 months, in the new academic year children will not start to learn how to read or write before April, which has raised eyebrows among educators, who believe that this is not enough time -- a period of two months -- and therefore, these skills will be learned in the second grade. Pointing out the age difference that will be there in classes in the new school year, educators state that the new curriculum puts the burden on the shoulders of teachers, who will have to prepare different activities for both the younger and older students in the class. Class sizes are also expected to increase further with the arrival of the new younger first graders.

Former Ministry of Education Board of Education and Discipline President İrfan Erdoğan told Cihan news agency that primary education cannot be thought of as just the first grade because it is a four-year period. As a primary school teacher will deal with the same students throughout this four-year period, Erdoğan went on to say that the teacher will get to know the capacity of each student and will conduct relevant activities according to the capacity of developmental level of each student in class. “If a teacher can prepare activities or class tasks for students with different levels of development, ages or socioeconomic backgrounds, they are a good teacher. If not, they cannot be a good teacher. Teachers will have to be creative in their teaching with the new system,” Erdoğan noted.

The principal of an İstanbul school, who asked not to be named as public officials are not authorized to speak to the press, told Cihan news agency that the first grade's curriculum is almost the same as the curriculum of pre-school, adding that as teachers will have to deal with on average 55 students in a class at the same time, it is impossible for a teacher to prepare different activities for each student in class. Referring to the fact that only two months are allocated in the new curriculum for learning to read and write in the first grade, the principal stated that it is impossible to teach these skills to students in two months, meaning that reading and writing will be postponed until second grade.

A primary school teacher, who also declined to be named, told Cihan news agency that as students have different family backgrounds, students from families with a high socioeconomic level have preliminary knowledge for first grade, while children of families from a lower socioeconomic standing will take much longer to learn to read and write, adding: “Students will also have different levels of development in the same class. Students whose levels of development are higher than younger ones will learn much better, which will also cause a problem for the teacher as these students will get bored while the teachers engage with the slower ones. How will teachers involve these students in the lesson? It is far too difficult.”

Meanwhile, the Ministry of Education has announced that primary school teachers will undergo in-service training courses for the new system between Sept. 3 and 7, before the start of the new school year.