New York Times calls Turkey a 'danger' to NATO and US

In an article that heavily criticizes Turkish PM Erdogan for setting up an ‘authoritarian state’, the New York Times urged the US to send a ‘strong message’ to Turkey, describing them as a ‘danger’ to NATO and the US. 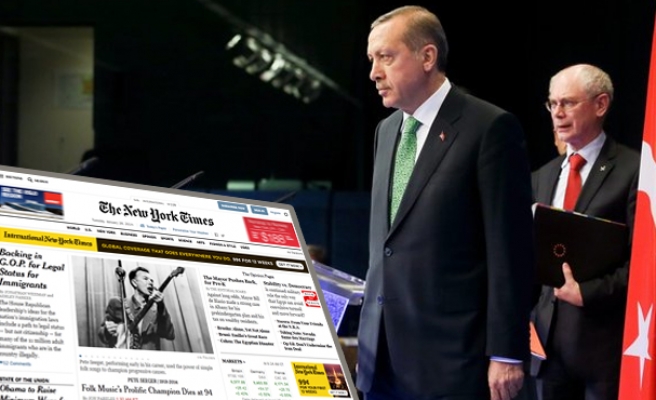 The Editorial Board of the US-based New York Times has come out with a number of tough criticisms against the Turkish Prime Minister Recep Tayyip Erdogan.

Referring to controversial reforms and reshuffles made to the Turkish judiciary and police force in light of a series of anti-graft operations ordered by prosecutors against bureaucrats and businessmen close to Turkey’s ruling AK Party, the New York times accused Prime Minister Erdogan of creating a ‘political disaster.’

While praising Turkey for its strides towards democratization of state systems, which has largely been achieved during Erdogan’s 11 year reign as Turkish premier, the New York Times said that Erdogan had transformed Turkey into an ‘authoritarian state.’

The Editorial Board, who published the condemnation of Erdogan on Monday, called his tactics against the Turkish opposition ‘ruthless’ and described the crackdown against Gezi Park rioters last June as an ‘attempt to crush dissent.’

Quoting Germany’s foreign minister Frank-Walter Steinmeier in saying that Europeans should demand that Turkey returns to the ‘rule of law’, the New York Times stated that Erdogan’s policies threatened to derail Turkey’s membership talks with the European Union and destabilize NATO.

Furthermore, the New York Times also claimed that Turkey posed a ‘danger’ to NATO and the United States, urging US president Barack Obama’s administration to ‘send a strong message’ to Erdogan.

Erdogan, who has won three back-to-back democratic elections to remain Turkey’s Prime Minister since 2003, threatened to expel the US ambassador to Turkey after implying that the US had a hand in the December 17 police raids which also saw the arrest of the general manager of Turkey’s state-owned Halkbank on charges of breaching international sanctions on Iran.

The arrest came after US-based pro-Israeli lobby AIPAC pressured US congressmen to write letters to the US treasury and foreign ministry, calling for action on Halkbank.

The Turkish leader then pointed the finger at former ally Fethullah Gulen, who runs Turkey’s most influential lobby – the Hizmet Movement – from his home in Pennsylvania, USA.

Gulen, who the New York Times described as a ‘moderate’ Islamic scholar, has a number of followers in influential positions in the Turkish judiciary and police force who have been accused of carrying out the operations and setting up a ‘parallel state’ to undermine the legitimate government in a ‘post-modern coup’ attempt ahead of local elections in March.