After the death of hundreds of refugees in waters, refugees are now using road routes and flooding the Istanbul bus terminal to go to the Greek border 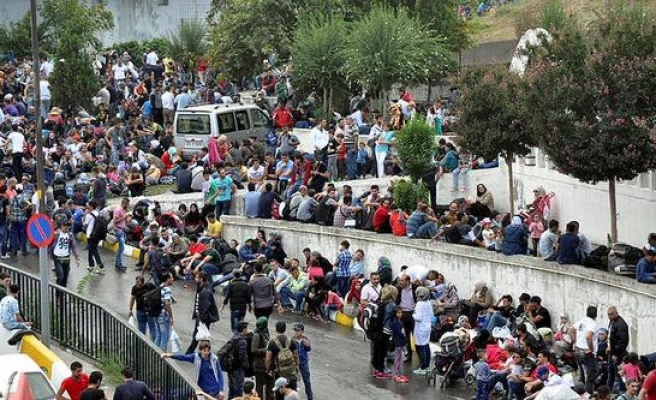 Two weeks after Aylan Kurdi's death, the three-year-old Syrian refugee, whose tiny body was photographed washed up on a beach in Turkey, continues to haunt refugees scrambling to reach Europe

"No more Aylan," a group of mostly Syrian refugees camped out at Istanbul's main bus station chanted on Tuesday.

Around 500 refugees had gathered at the station with the intention of travelling overland to Greece, avoiding the perilous Mediterranean voyage that has cost over 2,600 people their lives this year.

But their dreams of reaching the EU in the relative comfort of a bus hung by a thread, after the bus companies, citing unexplained "orders" from higher up, refused to sell them tickets for the northwestern Turkish city of Edirne, around 30 kilometres (20 miles) from the Greek border.

Jihad, a 22-year-old Syrian chemistry student, told AFP he was on his third attempt to reach Edirne after a failed boat crossing to Greece.

The sea voyage ended when the boat was intercepted by Turkish authorities."It was so scary, I had nightmares in the days leading up to the journey. I'm almost glad I was detained because otherwise I could be dead," Jihad said.

Yet his efforts to skirt the Mediterranean have also come up short, with police twice arresting him and returning him to the southeastern province of Gaziantep, on Turkey's border with Syria.

The combative Damascus native is not abandoning his quest, however.

'We don't want to drown'

The refugees in Istanbul are mostly Syrians, on the move from the Turkish camps and communities that are sheltering nearly two million refugees.

A number of women and children were among the crowd that congregated around a mosque at the bus terminal, where authorities distributed food and water. At least one of prospective traveller was in a wheelchair.

Some waved pictures of Aylan Kurdi.

Twenty-five-year-old Murad, who works for "Crossing no more", a Syrian NGO that campaigns about the dangers of refugee boats, said the Turkish restrictions were forcing refugees to brave the sea.

Bahar, a 25-year-old mathematician from the central Syrian city of Homs who had been waiting at the station for hours, was determined to make it to Europe -- on foot if necessary.

She and her husband bought their tickets online from Turkey's biggest bus operator for 14 euros each ($16), but a salesman at the terminal tore them up when they attempted to board the bus to Edirne Tuesday, saying they were "banned" from travelling to the city.

"My only goal right now is to make it to Edirne. After that I hope to cross into Greece and then Germany or any other country," she said in flawless English.

The route across the Aegean Sea was "out of the question", she stressed.

But those who make it to Edirne face further obstacles.

Around 1,000 refugees -- some of whom had walked part of the 250-kilometre (200 mile) journey from Istanbul on foot -- were barred by police from leaving the city's bus station on Tuesday.