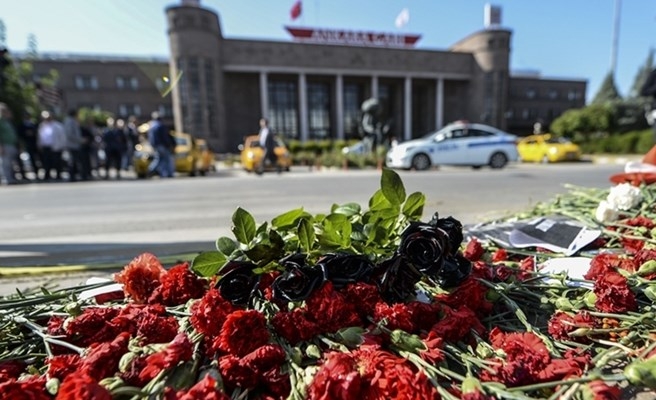 One of the suspected suicide bombers involved in the recent deadly Ankara blasts has been identified, Turkish Prime Minister Ahmet Davutoglu said Monday.

"A series of DNA tests have been carried out to identify the bombers, and one of them has been identified," Davutoglu said, without revealing any names or gender.

"Work is in progress to identify the other [bomber]," he added.

On Sunday, a Turkish court in Ankara ordered the arrest of four out of 11 suspects over the twin bombings that hit the Turkish capital on Oct. 10, which killed 102 people and injured hundreds at a peace rally.

The prosecutors had decided to refer six of the suspects to the penal court on duty, while releasing four others and requesting judicial controls for another.

Initially, 14 suspects had been taken into custody as part of the investigation. Three among them -- who were detained due to suspicious posts on Twitter -- were later released.

Davutoglu said that the investigators were also examining "links" between the Ankara and Suruc blasts, referring to the July 20 bombing that killed 33 people in the southeastern Diyarbakir province. The Suruc attack targeted pro-Kurdish activists and it was blamed on ISIL.

Turkish Deputy Prime Minister Numan Kurtulmus said on Oct. 12 that two suicide bombers had carried out the attack in Ankara, each of whom used about five kilograms of TNT explosives.

The Ankara bombings have shaken Turkey as the country faces a general election re-run on Nov. 1, while counter-terrorism operations continue in the southeast and an ongoing civil war rages on along its southern border in Syria.