Orthodox Christians from abroad gather in Turkey's Sumela after 88 years

Orthodox Christians from Russia, Greece, Georgia and the U.S. poured in Trabzon for an historic mass at the Sumela Monastery. 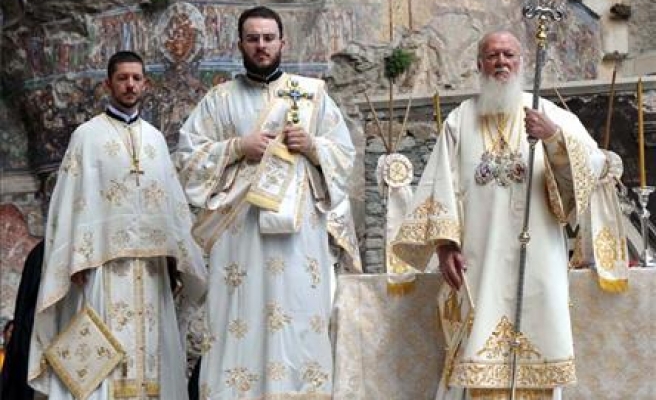 Orthodox Christians from Russian Federation, Greece, Georgia and the U.S. poured in Trabzon, a Turkish city by the Black Sea Coast, for an historic mass at the Sumela Monastery which was closed to worship for 88 years.

Fener Greek Orthodox Patriarch Bartholomew is leading the mass marking the Assumption of Mother Mary, a sacred day for Christians. The mass is attended by 500 Orthodox Christians.

Some 1000 more is watching the historic mess live on large screens down at the the valley because there was not enough space in the monastery.

The monastery was opened to worship for a single day with special permission of Turkish government.

Patriarch Bartholomew told reporters at the Trabzon Airport on Saturday that the opening of the monastery was an act of grace on part of the Turkish government.

"We owe this day of worship to our government which was kind enough to grant us the permission. We are most thankful as this day is sacred for not only believers in Black Sea but for all Orthodox and Christian world as its the Assumption Day of Mother Mary. We are blessed to celebrate this day here in Sumela.

Standing at the foot of a steep cliff facing the Altindere valley in Trabzon's Macka town, Sumela Monastery lies at an altitude of approximately 1,200 metres. Founded in the year 386 AD during the reign of the Emperor Theodosius I (375-395), legend has it that two priests undertook the founding of the monastery on the site after having discovered a miraculous icon of the Virgin Mary in a cave on the mountain.