The seminary in Heybeliada, Istanbul, opened its doors for the first time in 30 years for an art exhibition. 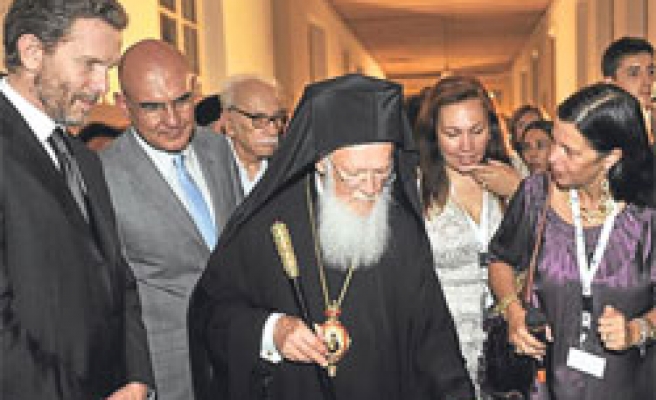 The seminary in Heybeliada, Istanbul, opened its doors for the first time in 30 years on Sunday for an art exhibition.

Fener Greek Orthodox Patriarch Bartholomew inaugurated an exhibition titled "Tracing Istanbul" in Heybeliada, one of the Princes' Islands of Istanbul.

"We hope the seminary will re-open, and we expect our government to do so as soon as possible," Bartholomew said during the inauguration ceremony.

Also, Greek Minister of Culture Pavlos Yeroulanos defined the inauguration of ceremony in the seminary as historic, and hoped that the seminary would be re-opened.

The event comes to life through the invaluable hospitality of the Heybeliada seminary, the Consulate General of Greece in Istanbul and the Cultural Organisation of the Municipality of Athens "Technopolis". The organization of the exhibition is implemented by the company White Fox S.A and curated by art historian Iris Kritikou.

A part of the exhibition has started to be displayed at the Greek Consulate in Istanbul.

The works of art, which at the vast majority have been created specifically for the exhibition, cover a wide range of artistic expression created by different generations and styles. Exhibited will be 101 artistic attempts at "narration" through painting, sculpture, construction, photography, video and hagiography.

On the sidelines of the exhibition, a documentary titled "Tracing Istanbul" will be screened in Heybeliada in Greek, Turkish, English and Russian languages.

The exhibitions in Heybeliada seminary and Greek Consulate General in Istanbul will stay open till September 23.

The same exhibition will be inaugurated in the Greek capital of Athens in October.