FM Davutoğlu said some people don't want the settlement process to succeed because 30 years of the PKK conflict has created an industry, and the Sept. 12, 1980 military coup period created a “marsh” that fed the conflict 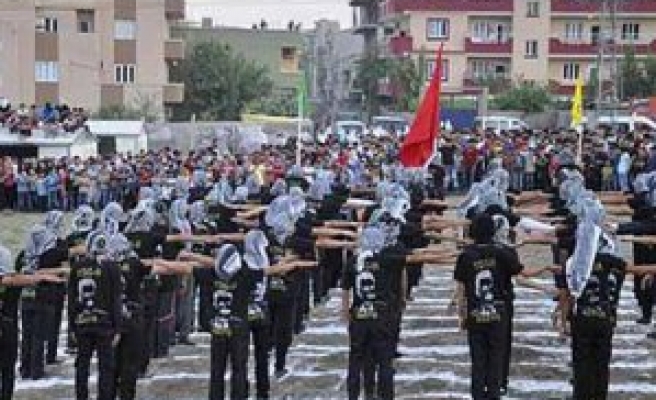 Media outlets are reporting that the Kurdistan People's Party (PKK) has been using checkpoints and so-called public order units set up by the PKK-affiliated Patriotic Revolutionist Youth Movement (YDG-H) to pressure locals in southeastern provinces.

The Bugün daily reported on Tuesday that YDG-H members had set up checkpoints and “public order units” in downtown Şırnak, as they had previously done in the southeastern city's Cizre district. Increased traffic on PKK members’ radio transmitters around downtown Şırnak signaled that the PKK had stepped up its activities in the city; according to the daily, security forces picked up PKK signals in Şırnak's Gazipaşa neighborhood, the town of Balveren, the villages of Kavuncu and Dağ Konak, and Beytüşşebap and Silopi districts. In conversations heard on PKK radios, high-ranking PKK members instruct PKK militants not to trust the Turkish government and to continue their activities.

Bugün said the PKK's goal is to incite young people to take to the streets. YDG-H members operating in downtown Şırnak are raiding shops, threatening and assaulting shopowners, and throwing Molotov cocktails at cars and shops to pressure locals, and the so-called public order units frequently clash with Turkish police, according to the daily.

In the last month alone, Cizre and the city of Şırnak have seen a total of 160 clashes between police and PKK “public order units,” which threw over 1,000 Molotov cocktails and 100 hand-made explosives at the Turkish police.

The story of the PKK “public order units” broke in Turkish media in June with the dissemination of a video showing a group of masked persons in Cizre.

The video showed a military ceremony held by YDG-H members in which members chosen to serve in the “public order units” were awarded diplomas. The YDG-H members' faces were covered with scarves and they wore T-shirts emblazoned with a picture of jailed PKK leader Abdullah Öcalan as they stood in silent homage to PKK militants killed in clashes with the Turkish military.

They then burned car tires on Nusaybin and İdil streets in Cizre and checked the IDs of drivers passing on the roads. The video caused a strong public reaction. Both the Şırnak Governor's Office and pro-Kurdish Peace and Democracy Party (BDP) pledged to investigate the video.

The Turkish government is preparing to move forward with the second stage of a settlement process launched with the PKK in October 2012 in a bid to end Turkey's decades-old conflict between the PKK and state. The second stage consists of constitutional amendments and legal changes to grant more rights and representation to the country's Kurdish minority.

In a Thursday press conference, Peace and Democracy Party (BDP) Deputy Chairwoman Pervin Buldan told reporters that the BDP is still investigating the incident, adding: “We don't know who does this or how they do this. In the meetings with PKK leaders in Kandil [the PKK's headquarters in northern Iraq], they say they are also monitoring the developments closely and say they don't have any links with the setting up of public order units in Şırnak. There might be some provocations designed to sabotage the ongoing settlement process.”

In a related incident in Şırnak's Silopi district, a group of people believed to be PKK sympathizers attacked the Silopi Police Department with Molotov cocktails on Monday night. The police responded with tear gas and water cannon in a clash that lasted three hours before the attackers escaped down side streets. The police tightened security in the district after the attack.

In a TV interview on Monday night, Foreign Minister Ahmet Davutoğlu said some people don't want the settlement process to succeed because 30 years of the PKK conflict has created an industry.

Davutoğlu said the Sept. 12, 1980 military coup period created a “marsh” that fed the conflict, adding, “While Turkey is democratizing, some powers are making great efforts to preserve this marsh.”

Turkish Parliament Speaker Cemil Çiçek said at a press conference at Parliament on Tuesday that a major point Turkey had missed from the start was the conflict’s “external support.”

“Turkey is determined to resolve its terrorism problem... Which powers provide support to the PKK is clearly stated in Europol's 2013 terrorism watch report.”

PKK trains members of other organizations

According to a report prepared by the intelligence department of the Security General Directorate (EGM), the Kurdistan Workers' Party (PKK) trains militants of other organizations such as the Revolutionary People's Liberation Party/Front (DHKP/C) and the Marxist Communist Party (MLKP) in its camps outside Turkey's borders.

The report, which reveals the cooperation among organizations, says that militants that are located around the Kandil Mountains have been receiving training in arms and bombs from a group of experts in these fields for almost three months. The report, which has been sent to the relevant government authorities, warns against possible sensational attacks in big cities, particularly in İstanbul and Ankara, by these newly trained militants.

Following the beginning of the settlement process between the government and the PKK to end the decades-long armed-conflict, the PKK and the Kurdistan Communities Union (KCK), an umbrella network that includes the PKK, contacted the DHKP-C and the MLKP marginal organizations, according to the information in the intelligence report.

According to the report, the PKK/KCK will go back to methods such as leaving packages including bombs, particularly in İstanbul, to cause a sensation. The organization also has plans to attack cities like Adana, Gaziantep and Kahramanmaraş where there are NATO troops and where the Patriot defense systems are installed. The report also indicates that the PKK/KCK plans to attack the Syrian refugee camps in Turkey to stir the people.

The report suggests that the two organizations, the DHKP-C and the MLKP, recruit members at summer camps, concerts and picnics. According to the report, the DHKP-C, which has been inactive since its attacks on the Justice and Development Party (AK Party) headquarters in Ankara and the Ministry of Justice in March 2013, is getting ready for new suicide bombing attacks.

Based on the intelligence provided in this report, the EGM warned all of its departments across Turkey about possible attacks and to increase security measures.