Probe launched as one more killed in Turkey floods - UPDATED

The Samsun Chief Prosecutor's Office has announced that an investigation was launched into the deaths of 12 people in the province last week as a result of flash floods triggered by torrential rains. 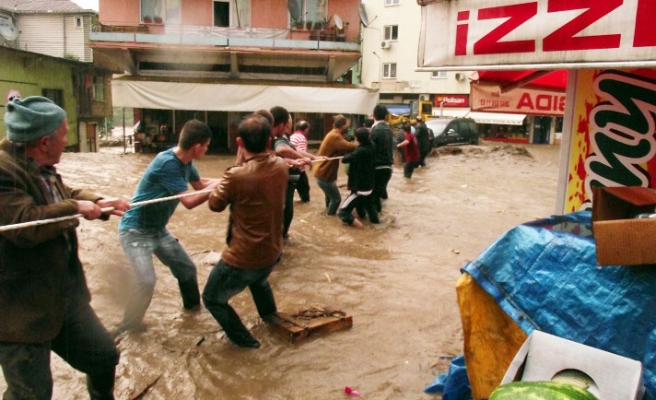 The Samsun Chief Prosecutor's Office has announced that an investigation was launched into the deaths of 12 people in the province last week as a result of flash floods triggered by torrential rains.

In a separate incident on Monday, a man was pronounced dead after he was pulled from the debris of his house, which collapsed due to heavy rains in the village of Çamalan in Samsun. Two other people were injured in the incident and immediately taken to nearby hospitals, where doctors pronounced their condition not life-threatening.

Samsun Governor Hüseyin Aksoy said his office had sent helicopters to help rescue the victims from under the debris but that they were unable to land in the village due to bad weather conditions. “Then we sent search and rescue teams to the village by vehicle. Three people under the debris of a house were saved, but one of them, Mesut Zengin, died on the way to a hospital,” the governor said. Zengin was reportedly 65 years old.

Aksoy also stated that the heavy downpour in Samsun had caused a stream to overflow, damaging a bridge and flooding the ground floor of Salıpazarı State Hospital, with one patient having to be moved to another hospital. He said emergency teams were sent to the area and that 39 people were rescued in Salıpazarı alone. The governor denied news reports that one person was missing after Monday's floods. “There was a missing person, but he was found alive. There are no missing persons right now,” he noted.

On July 8, torrential rains hit Samsun, triggering flash floods in many parts of the province and killing 12 people, including six children. The downpour caused the Mert River to break its banks, flooding nearby homes and shops. An apartment building erected by the Housing Development Administration of Turkey (TOKİ) was adversely affected by the deluge, and the building's ground and first floors were flooded. Five of the 12 victims died in the building.

After the July 8 floods, those affected complained that they had received no warning from authorities about heavy rains and the possibility of flooding. The fact that floods in Samsun most seriously impacted the TOKİ complex has triggered speculation over whether the risk of natural disaster was taken into account when choosing the location of the mass housing complex.

‘Houses built in stream beds to be demolished’

Youth and Sports Minister Suat Kılıç traveled to Samsun on Tuesday after the second flood disaster and announced the government's intention to demolish all houses and other buildings built within stream beds in the province.

The minister said citizens residing in subject buildings would be transferred to other buildings, and that the government would demolish buildings built on stream beds. “Every measure will be taken in order to avert any possible loss of life in such incidents [floods] in the future,” the minister said. Kılıç also said the government would not require flood victims to pay electricity, water and natural gas bills over the next three months in order to help them overcome financial problems arising from the floods.

In addition, the minister said shop owners adversely affected by the floods in Samsun would be provided with relaxed conditions for the payment of debts, but further added: “Turkey will no longer show tolerance to residents of buildings which are built inside stream beds. We do not want to witness future disasters.”