Gathered under the name of "Rabia Generation," protesters shamed world leaders for turning a blind eye to the coup in Egypt. 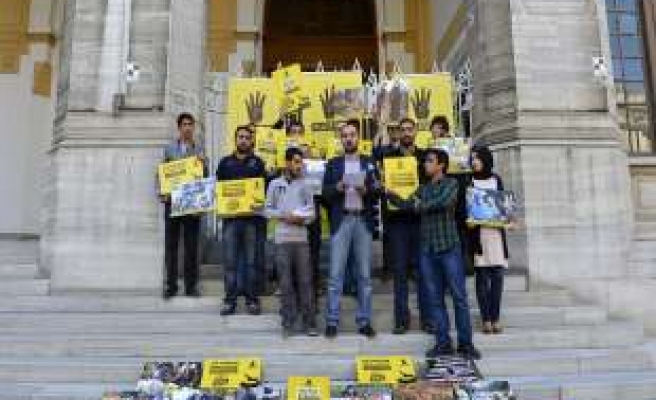 A group of Turkish youths have shipped 100 letters to 100 leaders worldwide, including the US, Russia and China, on Wednesday to raise awareness for Egyptians' sufferings after an infamous military coup that toppled the country's first elected president Mohamed Morsi.

Gathered under the name of "Rabia Generation," linked to the International Rabia Platform, protesters shamed world leaders for turning a blind eye to the coup in Egypt. Abdulsamet Temel, the Secretary-General of the Alliance of Youth Civil Societies, read the letter aloud.

He also criticized world leaders for failing to call "the military coup as a coup" and for remaining silent. Temel said the army forcefully dispersed pro-democracy protesters, killing hundreds of people.

"The Egyptian people are living under fear and anxiety due to martial law for 100 days. Western countries, intellectuals and journalists who championed defending democracy are watching silently the massacre in Egypt," he said.

After a protest, the group entered a post office to send the letters written in Turkish, English and Arabic. This program is staged as a part of the 100th day of the military coup in Egypt.

Apart from this program, the Rabia Platform plans to stage global demonstrations such as protest marches and photograph exhibitions.

The Rabia platform takes its name from the Rabia al-Adawiyya Square in Egypt, home to anti-coup sit-ins that were violently dispersed by the Egyptian military's crackdown on August 14.