Ramadan from eyes of an Uruguayan

A curious Uruguayan student about Islam, Eugenia Garcia, has flown more than 12 thousand km to feel in Turkey the atmosphere of the Islamic holy month of Ramadan 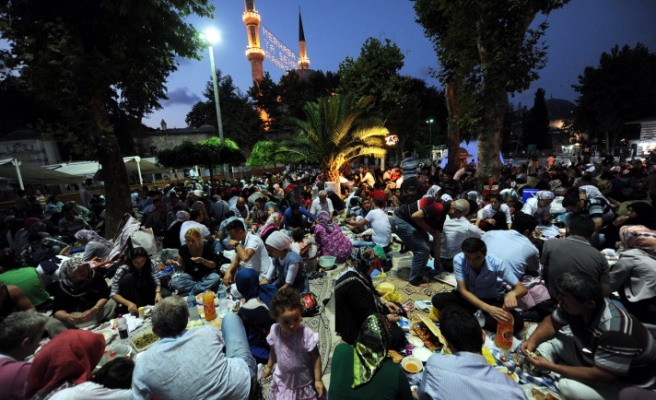 A curious Uruguayan student about Islam, Eugenia Garcia, has flown more than 12 thousand km to feel in Turkey the atmosphere of the Islamic holy month of Ramadan when Muslims fast from sunrise to sunset.

"I am impressed by people's devotion with the Islamic culture and to see how people are devoted with sharing and thinking each other," she told the Anadolu Agency after a fast-breaking meal she attended in the Turkish capital, Ankara, which was hosted to draw attention to the problems Muslims faced in Syria, Arakan and Gaza.

"This is a nice act of solidarity from the Muslim community. I am impressed with the number of people attending the event. The most surprising part of the meeting was that so many young people were here, and it was great to understand that not just adults are considering about what cruelties are taking place in the world," she said of the meal at capital's biggest mosque, Kocatepe.

The fast-breaking meal was hosted by Turkish journalist Adem Ozkose who was released after being detained in Syria for nearly two months. More than 900 people joined in the meal where they broke their fast with Turkish bagel, dates and water.

Coming from a Catholic background and a first time visitor in Turkey and a Muslim country, Garcia said she was impressed with the atmosphere in the Kocatepe Mosque.

"The meal at the mosque was the most touching activity I have experienced so far during my trip in Turkey. I am planning to attend a mass fast-breaking meal at the Sultan Ahmet Mosque in Istanbul to feel the atmosphere there too," she said.

Being an international relations student, Garcia said that before coming to Turkey, she was aware of the economic growth of the country, adding that humanitarian aid the Turkish government extended to crisis regions showed the sensitivity of Turkish people towards international issues.

Also visiting the city of Konya, Garcia said, "I felt like if I was in a city where everyone was thinking about the Ramadan. I shared my day with a Turkish family who showed me the practices of Islam religion. It was great spending time with them. I had the chance to learn about the rules of Islam and how the Islamic practices take place."
Garcia said she had also visited The Mevlana Museum, dedicated to the 13th century Muslim philosopher and the father of the Mevlevi sect that houses the dervish lodge of the whirling dervishes.

"I was moved by the Muslims who come here and pray at Jalal ad-Din Muhammad Rumi's mausoleum and by seeing how important this place is for the Muslims," she said.

"I am also impressed with the good quality of life standards in Turkey and the warmness of the Turkish people. The Turkish hospitality is the most precious gem of this country," Garcia said.

Garcia said she had visited Ankara, Antalya, Nevsehir and Konya and she would be visiting Istanbul and Tekirdag next before going back home at the end of the Ramadan.