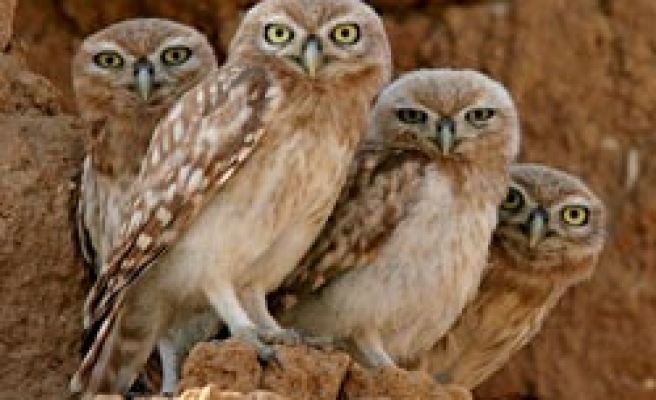 Ornithologists from Turkey based "Nature Association" announced they managed to take photos of three Fish-Owls in the Taurus mountains.

No more than 10 pairs of Fish-Owls are believed to inhabit Turkey, the only place in Europe where the species breed.

Nature Association's Science Coordinator Ozge Balkiz said ornithologists Soner Bekir, Murat Bozdogan and Emin Yogurtcuoglu ranged over the terrain from Kahramanmaras all the way to Antalya, to spot the species which is in the Red List Category of the International Union for Conservation of Nature.

Ozge believed more pairs inhabit the area, noting that the bird which hunts at nights manages to hide itself successfully despite its enormous size.

She said the breeding ground of Brown Fish-Owl which is endangered in Europe, is threatened by dams and hydroelectric powerplants.

Ketupa zeylonensis is an all-year resident throughout most of tropical south Asia, from Pakistan through India to southern China and Southeast Asia; it is also found on Sri Lanka. West of its main range, it is patchily distributed to the northern Levant and soutwestern Asia Minor. It inhabits mainly the lowlands, in well-wooded habitat, from open woodland to dense forest as well as in plantations. Western birds are found in semiarid landscape and may breed in oases in arid regions. Regardless of habitat, it rarely strays far from larger bodies of water such as rivers and lakes.

This species is very nocturnal but it can often be located by the small birds that mob it while it is roosting in a tree. It feeds mainly on fishes, frogs and aquatic crustaceans; amniotes, in particular terrestrial ones, are seldom taken.

Brown Fish-Owl has an extremely large range, and hence does not approach the thresholds for Vulnerable under the range size criterion.

For these reasons the species is evaluated as Least Concern.