From refugees' makeshift camp on outskirts of border city Edirne, they began walking in direction of city centre, beyond which lies road to Greece 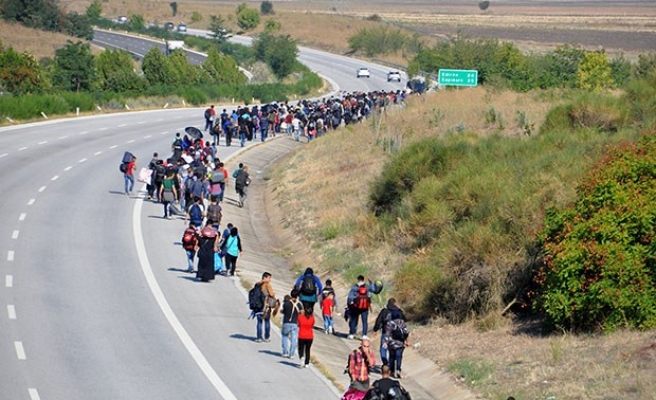 Several hundred refugees who have been blocked by police in northwest Turkey from crossing overland into Greece drew closer to the border Friday after the authorities briefly opened the route.

From their makeshift camp on the outskirts of the border city of Edirne the refugees -- mostly Syrian refugees -- began walking in the direction of the city centre, beyond which lies the road to Greece, an AFP photographer reported.

"We will walk peacefully, we don't want to fight," Mohammed, one of the representatives for the refugees told AFP by telephone as the crowd surged forward after the military police barricading the route agreed to escort them along the road.

But less than two hours later they came to a halt, after the police erected a new cordon just outside Edirne.

Encouraged by the #Crossingnomore social media campaign, which called for refugees to be allowed to travel safely overland to Greece rather than risk their lives at sea, up to 1,000 refugees had flocked to the city since Monday.

But on Tuesday police sealed off the main road into the city from the east and sealed off access to the bus station, preventing refugees arriving from other Turkish cities by bus from continuing their journey westwards.

Provincial governor Dursun Ali Sahin said on Wednesday the refugees would be sent back to refugee camps in southern Turkey.

Friday's march came after a meeting between a group of refugees and Prime Minister Ahmet Davutoglu failed to materialise.

Sahin appealed for Europe to show more solidarity with the refugees.

"If a country issues an invitation to the refugees, we will send them on our own planes and buses. But no country has pledged to accept them," he lamented.

Many of the refugees seeking to leave Turkey have been living in the country for months, sometimes years, after fleeing the bloody civil war in Syria across the two countries' 911-kilometre shared border.

Turkey is the country with the largest number of Syrian refugees, who are estimated to number two million, around 260,000 of whom live in refugee camps.

President Recep Tayyip Erdogan, who was to meet Friday with German Foreign Minister Frank-Walter Steinmeier, has been pushing for the creation of a buffer zone in northern Syria, arguing it would provide protection for those displaced by the fighting.