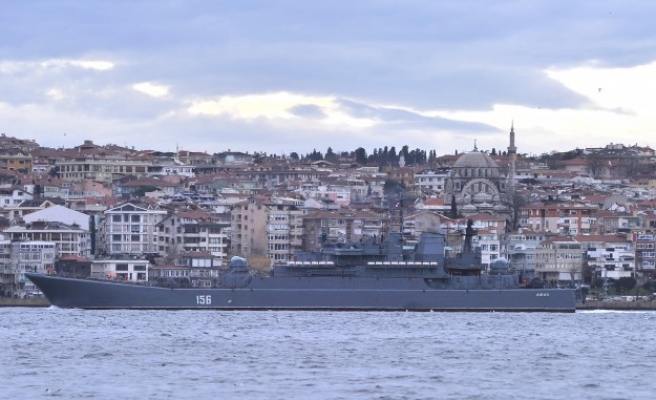 Two Russian warships on their way to the Black Sea have passed through Istanbul's Bosphorus staits.

Russia's 'Saratov' and 'Yamal' ships sailed unaccompanied through the Marmara Sea before entering the Bosphorus straits at 07:30 local time (05:30 GMT).

The two ships, which were usually based in the eastern Mediterranean to monitor developments in Syria, are now on their way to Crimea due to the latest situation there.

At the same time a Ukrainian ship called 'Hetman Sahaidachny' entered the straits at Canakkale (Gallipoli) on its way to the Marmara Sea.

Thousands of Russian troops have been deployed to the Crimea, an autonomous region of Ukraine, after Russia’s Parliament passed a motion on Saturday.

Due to prior agreements, the Bosphorus straits are recognized as international waters despite cutting through the middle of Turkey's most populated city, Istanbul.

The Bosphorus is a key strategic passage between the Black Sea and the Mediterranean Sea.

Turkey's General Staff said on its website that an IL-20-type reconnaissance jet had flown parallel to Turkey's Black Sea coast in international airspace.

Turkish FM: We will always stand by Crimean Tatars

Turkey’s Foreign Minister Ahmet Davutoglu said on Monday that Turkey will always stand by the Crimean Tatars, as he met with nearly 50 representatives of Crimean Associations.

Turkey supports and encourages the return of Tatars in their homeland Davutogllu said, adding that the current Turkish President and Prime Minister are saying that do not even think that we can stay indifferent to any matter related to our compatriots in Crimea or anywhere in the world.

“Wherever our brothers and sisters are suffering we will be the first to help them,” Davutoglu said.

The Crimean Tatars fear exile again if the Crimea region of Ukraine is going to stay occupied by Russia. The 280,000 Crimean Tatars living in the Autonomous Republic of Crimea constitute close to 13 percent of the total population, according to Turkey’s Foreign Ministry.

Muslim minority Tatars are manning the streets and mosques as they fear a repeat of the exile they faced in 1944 under Stalin, which saw them scattered in labor camps across the barren steppes of Central Asia.

Isler spoke at a visit to the Ankara Organized Industrial Region for local election campaigns.

''Ukraine’s political stability is very important for the other eastern European countries because they face the risk of separation due to ongoing political turmoil.”

He also emphasized that Crimea is part of Ukraine's territory and said consensus could help solve the problems.