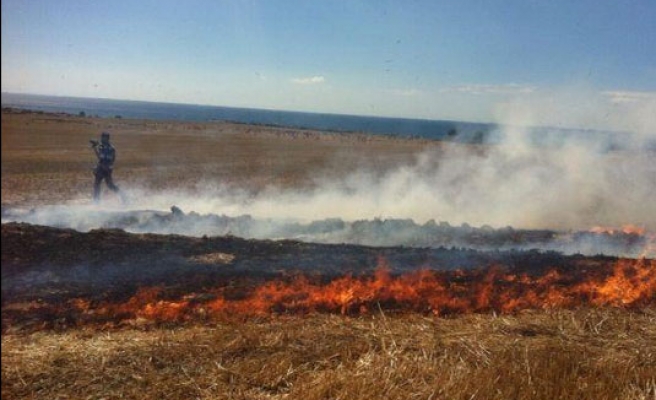 Turkish security forces intervened in crowds around the courthouse in Slivri in western Istanbul using tear gas ahead of the Ergenekon trial.

A Turkish court will announce the verdicts against 275 suspects of the five-year-long Ergenekon case, who are accused of plotting to depose the government, amid massive security precautions.

Ahead of the verdict, authorities banned protests at the court. Security forces set up barricades around the courthouse in Silivri, where the trial will take place, to tighten security.

A small scale fire broke out amid the intervention in the fields around the courthouse and it was extinguished immediately.

Meanwhile police did not let a group of people who want to go to Silivri to attend the demonstration in Turkey's north western province of Bursa.

There were also protests against the trial in Washington. A group of Turkish people dressed in black gathered in front of the White House with flags and black banners and chanted anti-government slogans suggesting the the trial was not objective.

The case began in 2007 with the discovery of 27 hand grenades in a house in Istanbul. Some of the country’s most prominent figures including former Chief of General Staff Ilker Basbug was detained and arrested, Republican People’s Party (CHP) deputies Mehmet Haberal and Mustafa Balbay and journalists, high-ranking military officials, have been jailed since then.

Police stopped ALL the busses going to Istanbul from other cities like Antalya, Kayseri, Ankara and Izmir. Police fined bus drivers and threatened them with imprisonment for carriying anti-gov protestors. They do not have a court order to stop busses and to take people out of busses. They took ALL ID cards and recorded (to label as anti-gov) them. Thousands of people are stuck on roads waiting :(