Syrian refugee children in Turkey to receive education in Arabic

Turkey is responding to the needs of tens of thousands of Syrian refugee children by providing them with education in their mother-tongue Arabic. 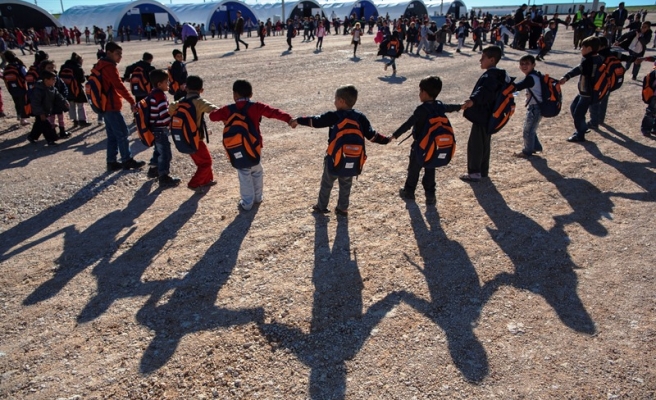 The government has prepared 55 schools across the country have been catering for Syrian refugee children in Turkey. They have employed Syrian school teachers to teach the children in their own language. Of these 55 schools, three of them are found in Istanbul’s Zeytinburnu, Bagcilar and Esenler, with 2000 students each.

Alongside the government, the Syrian Education Services and Consultation Association has been working to secure the right to education for Syrian living in Turkey since July 2012. Having come to Turkey with his family from Syria thirty years ago, the head of the association Ola Baghajati Ragipoglu said that last year the association recruited 1000 students, and that in the coming years they aiming for a ten-fold increase.

Commenting on the children’s progress, Ragipoglu said ‘’At first they were all drawing pictures of guns, injuries, blood and ruined buildings. By the end of the year this changed. We want to give these children the right to say ‘how lucky we are for Turkey looking after us’. They will be our future ambassadors in improving Syrian-Turkish relations.’’

Speaking to Turkey’s Zaman newspaper, Syrian refugee child Yasir Hellaf, 6, said ‘I love Turkey but when the war ends I want to turn back to my country. We ran away from the sound of bombs and guns. We went to Egypt but then war broke out there. Now I am very excited to be starting school here.’