Turkish Foreign Minister Mevlut Cavusoglu said the Syrian regime must go if permanent peace is to be established in the region. 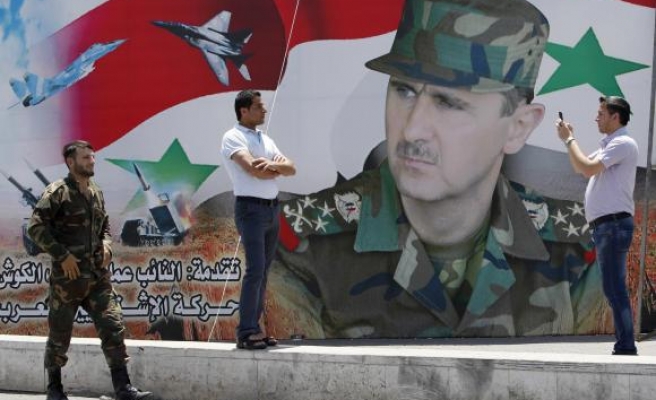 As long as the Syrian regime stays in power, stability could be established neither in the region nor in Syria, Turkey's Foreign Minister Mevlut Cavusoglu said.

Cavusoglu underlined that the situation in Syria and Iraq need to be considered as a whole so that the strategies planned with a view to solving the regional problems could be successful.

"Syria and Iraq should be treated as a single 'theatre' of action," he said.

"If you ignore what has happened in Syria, then you cannot find a permanent solution to the Iraqi crisis. The Syrian regime favors radicalism," said Cavusoglu, adding that the regime's policy based on sectarianism and ethnical discrimination threatened regional stability.

"Just like the new Iraqi government, the Syrian regime must be replaced by a new inclusive government based on the Geneva Communique," he said, underscoring that stability could be restored in Syria and the region through diplomatic means, and that a political solution was a must.

Adopted at an international peace conference for Syria in June 2012, the Communique is a six-point road map for Syrian political transition with a view to stopping the violence and reaching a political settlement.

The Communique requires the establishment of a transitional governing body "on the basis of mutual consent" that would “exercise full executive powers” and could include “members of the present government and the opposition and other groups."

As for the Iraqi crisis, Cavusoglu said that efforts must ensure that every component of the Iraqi nation allowed its people a voice, and the new government had made great strides in that regard as opposed to its predecessor whose "wrong policies paved the way for extremist and terrorist groups."

"However, much more needs to be done, including reversing the security situation and addressing the long-standing ethnic tensions and sectarian division," he said, adding that a defence infrastructure should be supported and guided towards a future where the Iraqis could defend themselves.

"It is imperative that no ethnic or sectarian group is excluded during the restructuring of the [Iraqi] army and public institutions," Cavusoglu stressed, adding that the extremists in the country exploited such wrong policies in the past.

"Unless political stability and peace is restored in both countries, there cannot be a permanent peace in the region."