Many Syrians were seen reading the holy Quran prior to the beginning of the fast-breaking meal. 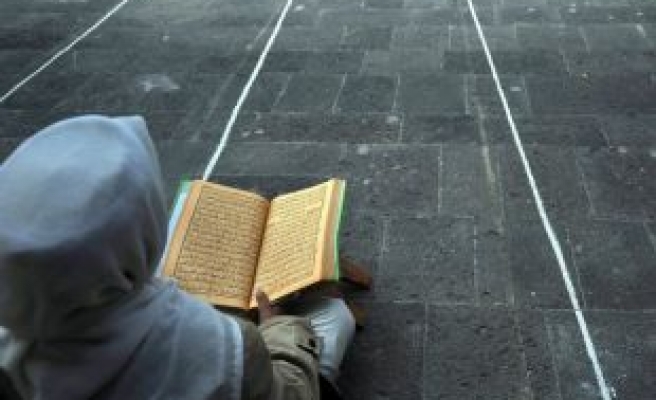 Many Syrians were seen reading the holy Quran prior to the beginning of the fast-breaking meal.

The Syrians thanked the Turkish people and Turkish Prime Minister Recep Tayyip Erdogan for hosting them and providing lodging.

The Deputy Chairman of the ruling Justice and Development (AK) Party, Bulent Gedikli on Friday had a fast-breaking meal with Syrians staying in the Yayladagi town of the southern province of Hatay.

Gedikli's fast-breaking meal with the Syrians was closed to the press corps. Speaking to the media after the meal, Gedikli said that their wish was to see an end to violence in Syria. We are receiving signals which imply violence in Syria would end soon, Gedikli stressed.

Speaking to reporters in Ceylanpinar, Gedikli said that they were making efforts to provide more services to Syrians staying in Turkey after the Syrians ran away from clashes in their country and took shelter in Turkey.

Bulent Gedikli listened to the problems of Syrians staying in Ceylanpinar and took notes on their requests.

"We are considering giving an allowance and jobs to the Syrians in Turkey," Gedikli also said.

Meanwhile, Turkish Foreign Minister Ahmet Davutoglu had his fast-breaking meal with children who gathered together at the Kemer Stadium and one that was sponsored by the Municipality of Esenler in Istanbul province.

Speaking to reporters during the meal, Ahmet Davutoglu said that their duty involved leaving a country, an Islamic world and a world in general that were all in peace.

Around 5,000 children and their mothers ate fast-breaking meals at the Kemer Stadium.