Akgül said, “We remained calm as our businesses were physically attacked and our windows broken, but we are having a hard time understanding the reason behind the protests now because they are being held for many different reasons each day." 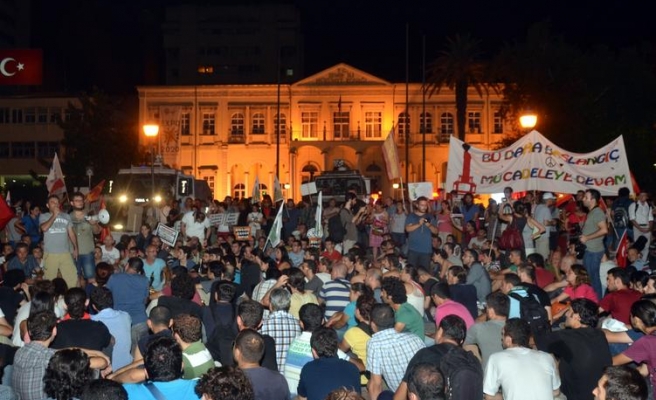 The Turkish Union of Credit and Guarantee Cooperatives for Tradesmen and Craftsmen (TESKOMB), member businesses of which have experienced huge financial losses due to the anti-government Gezi protests, mainly in İstanbul's Taksim neighborhood, held a press conference in Taksim on Monday, calling for the protests to end.

The businesses in the area had previously suggested that the protests calm down, but this is the first time a union has spoken out about the interruptions to commercial life. The union represents a total of 1.5 million tradesmen and craftsmen.

Addressing the press, TESKOMB President Abdulkadir Akgül noted that the shop owners are not against the protesters but he underlined that “it is time to stop.” Akgül expressed that the real victims of the protests are businessmen, stating: “We remained calm as our businesses were physically attacked and our windows broken, but we are having a hard time understanding the reason behind the protests now because they are being held for many different reasons each day. These unreasonable demonstrations and outbursts have used up our patience.”

A police crackdown on a group protesting the planned redevelopment of Gezi Park, a leafy corner of Taksim, triggered nationwide protests last month against the ruling government. During the month-long protests that mainly took place in Taksim, there were clashes between riot police and protesters that caused massive damage to places of business in the area.

Furthermore, Akgül noted that the squares of Taksim in İstanbul, Kızılay in Ankara and Konak in İzmir are significant for the country and the businesses there are actually what bring life to these squares. Akgül explained that the businessmen's hopes for an increase in sales during the summer were dashed and that “products are spoiling on the shelves as customers, mainly tourists, stay away from the area. Most days, they close having made no sales.”

He added that the aim of the press conference was to explain to the public the mistreatment of their businesses and to seek a return to the peaceful days had before the protests, something he called “normalization of the streets.”

Meanwhile, speaking to the media, Ayşegül Yorgun, a flower-seller whose family has sold flowers in Taksim for three generations, said: “We keep coming and going home empty-handed. We throw the flowers in the garbage and our debt to our suppliers is piling up. Nobody thinks about us.”