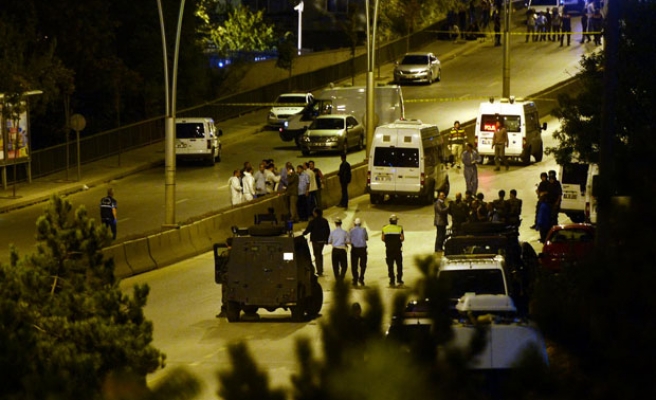 Turkish Police Department has seized three guns and two hand grenades after terrorists launched at least two rockets at the police house near police headquarters in Dikmen neighbourhood of the Turkish capital Ankara on Friday.

Turkish Police Department said in a written statement on Saturday that terrorists launched at least two rockets at the police house (a hotel and social facility for policemen and their families) near police headquarters in Dikmen at about 21:30 local time on Friday night, following which no casualties were reported as the rockets only caused structural damages on the building.

One of the terrorists did not obey the police officers' call "to lay down arms" and was captured dead while the other was captured wounded.

Ankara Governor Alaaddin Yüksel said on Saturday that the assailants Muharrem Karatas and Serdar Polat, were both members of DHKP-C terrorist organization and search warrants were previously issued for both, six for Karatas and four for Polat.

Yuksel noted that the assailants were carrying fake ID's and added, one of the assailant, Karatas was also the person who staged an attack on AK Party Headquarters with a flame thrower in March.

Addressing the leaders of non-governmental organizations in Turkey's eastern Malatya city earlier on Saturday, Turkish Prime Minister Recep Tayyip Erdogan had argued that anyone who dared to use such means to attack Turkey would definitely be addressed and get the retribution they deserved.

"Those who resort to such methods will definitely pay the price," Erdogan added.