Torch of Special Olympics started to be carried in Istanbul 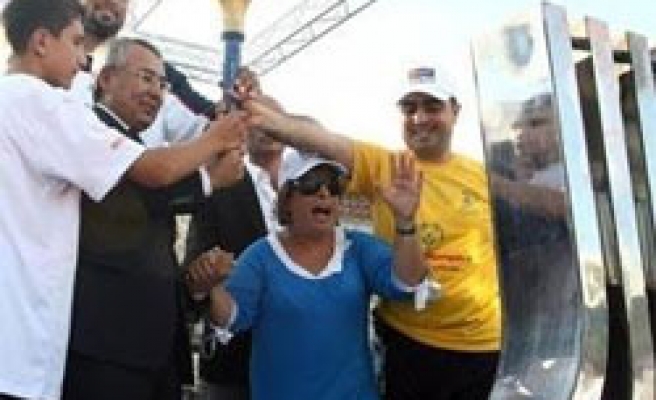 The first leg of the run started in front of Galatasaray High School at the Istiklal Avenue and ended in Taksim Square (European side).

Speaking before the start of the run, Dilek Sabanci said, "this is a very good organization. This run helps our children cling to life. I hope Turkish children will win medals. Support us."

The second leg will take place in Suadiye district at 3.00 p.m. on September 5 and end in Saskinbakkal concert area. (Asian side).

18 people will carry the torch within the scope of Europe tour.

The torch will tour Europe in 17 days with the help of 120 runners and reach Poland.

Delegations from 58 countries in Europe/Eurasia will gather in Warsaw, Poland for the 2010 Special Olympics European Summer Games taking place from September 18 -24.

More than 1,600 Special Olympics athletes and 600 coaches are expected to attend. The event will also include a host town program, a policy forum, family forum, youth summit, a torch run through Europe/Eurasia and much more.

The European Games offer a stage to showcase the Special Olympics movement in Western Europe, Eastern Europe and Central Asia and to celebrate the abilities and accomplishments of people with intellectual disabilities.

A Torch Run will take place ahead of the Games carrying the flame of hope across Turkey, Greece, Slovenia, Gibraltar, Luxembourg, France, Great Britain, Belgium and Poland before arriving in Warsaw. The run gives communities across Europe the opportunity to support athletes with intellectual disabilities.