Akdamar Church, located on Akdamar island in Lake Van, had been opened to worshippers for a single day. 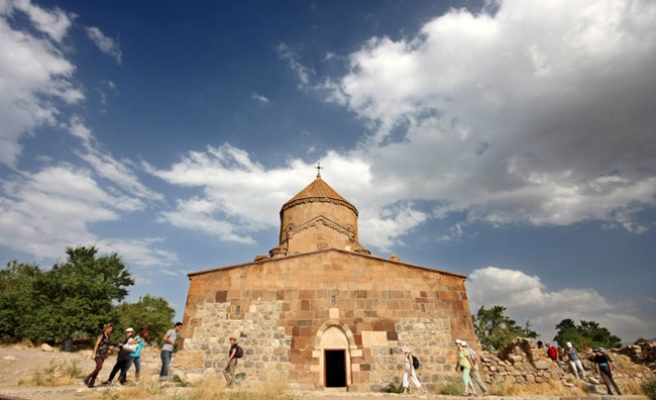 Tens of thousands of tourists have arrived in Turkey's eastern Van province since the beginning of the year to visit a historical Armenian church which was reopened to worshippers last September.

Akdamar Church, located on Akdamar island in Lake Van, had been opened to worshippers for a single day and hosted a religious ceremony for the first time after 95 years in September 2010.

The church, which had attracted nearly 30,000 tourists until the end of 2010, has received even more number of visitors during the first 7 months of the year, tourism officials told AA on Monday.

Officials said the number of tourists visiting the Akdamar Church was expected to reach 60,000 until the end of 2011 as the church would host another religious ceremony next month.

The name given to the island, Aght'amar, is explained by a well-known legend among local population: A nobleman who fell in love with a beautiful girl named Tamar visited the island every night to see her. As he was crossing the lake one stormy night, his boat capsized and fighting the waves, he drowned uttering the words "Ach Tamar". Tamar, awaiting the arrival of her loved one, grieved deeply upon hearing the news of his death and died soon after. Hence, the island was called "Ach Tamar" (Aght'amar/Akdamar) ever since.

Upon a proposal by the Governor's Office of Van and approval of the Turkish Culture & Tourism Ministry, authorities later decided that Akdamar Church shall host a religious worship once a year.