While the Turks celebrated, Inter's new boss Gian Piero Gasperini will come under early pressure after his side lost their third match out of three this season. 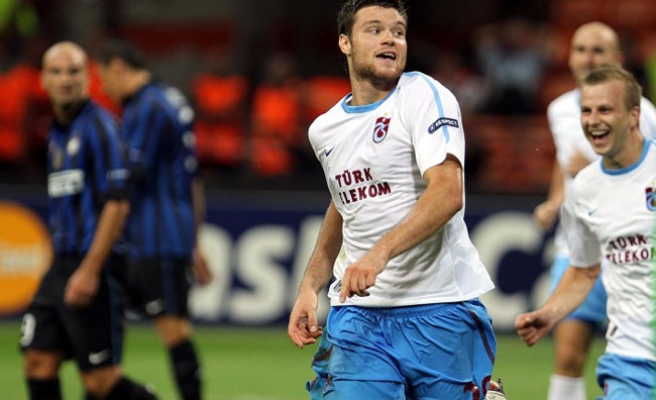 Inter Milan were the unwitting fall guys in the first week of the Champions League when they suffered a humbling home defeat on Wednesday by Trabzonspor, the Turkish team handed an unlikely free pass into Europe's premier club competition.

Inter, who beat Bayern Munich to win the trophy in 2010, lost 1-0 in their Group B opener at the San Siro, by far the biggest surprise in the eight groups.

"Football is made up of episodes, unfortunately we didn't manage to score and with just one shot at goal they netted. We have to keep our heads low and work hard," said Inter captain Javier Zanetti.

"It is a difficult moment. I hope the fans understand and together we can get out of this."

Last season's runners-up Manchester United survived a grilling in Lisbon where a goal by 37-year-old Ryan Giggs earned a 1-1 draw against Benfica in Group C while Real Madrid secured a gritty 1-0 win at Croatia's Dinamo Zagreb despite having Marcelo sent off.

Before seeing red for diving, Marcelo showed his classier side by carving out the chance which Angel Di Maria stylishly converted in the 53rd minute.

The other Group D match saw Ajax Amsterdam draw 0-0 at home to Olympique Lyon while Ligue 1 champions Lille squandered a two-goal lead to draw 2-2 at home to CSKA Moscow in Group B.

In Group A, regarded as the toughest of the eight, Bayern produced an authoritative display to win 2-0 at Villarreal while Manchester City and Napoli, both making their debuts in the competition, earned a point apiece in a 1-1 draw.

With Lille drawing against CSKA, Trabzonspor are the unlikely early pacesetters in Group B.

That represents a startling turn of events given they were supposed to be in the Europa League before being upgraded by UEFA after Turkish champions Fenerbahce were expelled over match-fixing allegations.

While conceding most of the possession to Inter, Trabzonspor looked perfectly at home in the setting.

A solid performance turned into a memorable one 14 minutes from time when Ondrej Celustka turned the ball home after Halil Altintop's shot rebounded off the crossbar.

While the Turks celebrated, Inter's new boss Gian Piero Gasperini will come under early pressure after his side lost their third match out of three this season.

A subdued Inter struggled to create chances although they should have been ahead when substitute Diego Milito wasted two gilt-edged opportunities to score. They now face two consecutive away games in Moscow and Lille.

Bayern, whose futuristic stadium will host the final in May, celebrated their 250th European fixture with a performance that suggested they could be serious contenders to claim the trophy for the first time since 2001.

Toni Kroos gave the Bavarians an early lead and Rafinha sealed victory late on. Bayern top the table although they face sterner tests from City and Napoli.

City's much-hyped entrance into the Champions League after being transformed by hundreds of millions of pounds of Abu Dhabi money looked like going flat when Edinson Cavani scored for the Italians on the break after 69 minutes.

Aleksandar Kolarov salvaged a point with a free kick despite finishing the match with a broken nose.

"We wanted to win but the Champions League is hard," City coach Roberto Mancini said. "For us it was important to start the campaign well.

"We were too nervous. In the first half we played really good football. In the second all the players wanted to score a goal."

While City were getting to grips with Champions League football for the first time, cross-town rivals United were relieved to come away from Lisbon with a point after falling behind to a classy strike by Paraguayan Oscar Cardozo.

United were stretched to breaking point at times and needed several top saves from Anders Lindegaard to keep them in the game.

The mercurial Giggs, already the oldest scorer in the competition and playing in his 18th Champions League campaign for the club, proved his worth again.

His unstoppable rising shot just before halftime earned Alex Ferguson's side a useful point from what should be their toughest match in Group C.

"In the last 15 minutes I think Benfica came into it a bit and Anders made one or two terrific saves to keep us in it," Ferguson said. "We had one or two chances ourselves but I think a draw was a fair result."

In the group's other match, Switzerland's Basel beat Romanian newcomers Otelul Galati 2-1 thanks to a late penalty by Alexander Frei as both sides finished with 10 men.