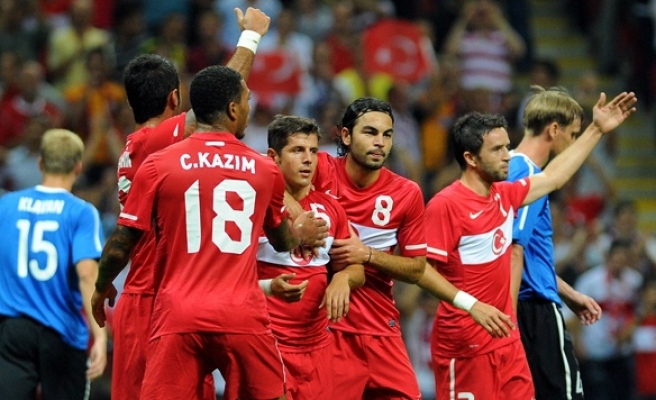 Turkey thrashed Estonia 3-0 with a penalty by Emre Belozoglu and a Colin Kazim double in a confidence-boosting friendly on Wednesday ahead of next month's Euro 2012 qualifiers.

Captain Emre kept his cool to score from the spot in the eighth minute after the midfielder was felled by Ragnar Klavan, helping silence a chorus of boos directed at him by the fans.

Emre was questioned by Turkish prosecutors earlier this month in a match-fixing probe involving his club Fenerbahce which has shocked the nation, ensuring him a hostile reception at the Turk Telekom arena, home of local rivals Galatasaray.

Kazim lit up a long dull spell with a stunning long-range shot in the 28th minute, turning after a pass from Emre to blast the ball into the corner of the net.

The 24-year-old netted another in the 35th minute from outside the penalty area after a pass from Selcuk Inan.

Estonia's best chance came from a Konstantin Vassiljev free-kick in the 53rd minute, which was comfortably saved by goalkeeper Sinan Bolat.

Turkey and Estonia will face each other in European qualifiers for the 2014 World Cup in Brazil.

Hiddink has faced criticism during his tenure for Turkey's patchy performances during their Euro 2012 qualifying campaign, which has included a 1-0 loss away to Azerbaijan.