Turkey defeated Ivory Coast 86-47 in its first game in Group A of the FIBA 2010 World Basketball Championship in the Turkish capital of Ankara. 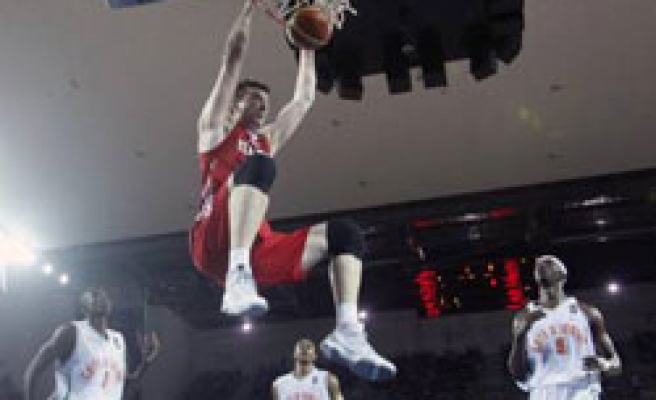 Turkey defeated Ivory Coast 86-47 in its first game in Group A of the FIBA 2010 World Basketball Championship in the Turkish capital of Ankara on Saturday.

A historic day was experienced at the Ankara Arena, where Turkey, the host country, took on Ivory Coast.

The Ankara Arena, with a capacity to host 10,000 spectators, was full during Turkey-Ivory Coast game, whereas Turkey's State Minister for Sports Faruk Nafiz Ozak, Supreme Court of Appeals President Hasan Gerceker, Ankara Governor Alaattin Yuksel and Director General for Youth and Sports Yunus Akgul were among the spectators.

The technical director of Turkey's national basketball team said that all the players in his team displayed a great performance at world championship Group C match with Ivory Coast.

Delivering a statement after the game, Turkey's coach Bogdan Tanjevic said the audience was spectacular and their support carried the team's motivation to the highest level.

Noting that Ivory Coast's playmaker got injured during the game and such development gave Turkey an advantage, Dessarzin said his team lost the match due to lack of experience.