Deputy Prime Minister, speaking on Tuesday in a meeting on Syrian refugees in Ankara, briefly said that the reports of the wall being built did not reflect reality 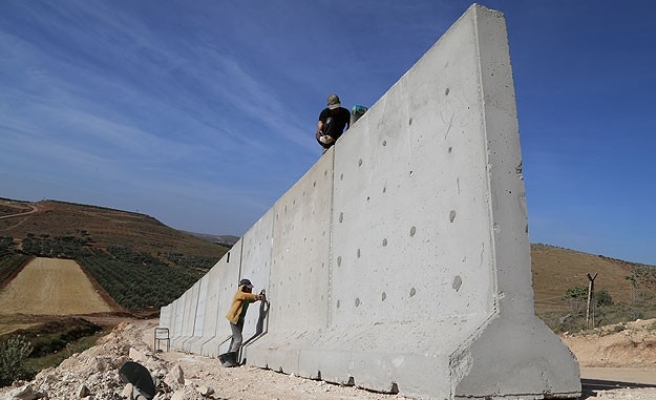 Deputy Prime Minister Besir Atalay has denied that Turkey is building a wall at its border with Syria, even though the mayor of a border town and witnesses on the ground say digging has started for the construction of one.

Atalay, speaking on Tuesday in a meeting on Syrian refugees in Ankara, briefly said that the reports of the wall being built did not reflect reality, but he added that measures are being taken to enhance border security.

His remarks were in response to a question about reports that digging foundations for a wall had begun in the border town of Nusaybin, 10 kilometers north of the mostly Kurdish town of Qamishli in Syria.

A witness in the area told Today's Zaman that soldiers had started digging foundations and that construction near the border gate has been going on for at least five days. Ayse Gokkan, the mayor of Nusaybin, a city in Mardin province that is mostly populated by Kurds, said soldiers have already dug within 300 meters of a residential area and also close to a school. According to information that witnesses and the mayor received from officials responsible for the construction, there will be a one-kilometer-long wall that is two-and-a-half meters high and topped with barbed wire.

“Now, trenches 300 meters long and a meter wide have been dug for the wall. According to verbal reports, the Turkish Land Forces decided upon the construction of the wall, and a brigade in Mardin has been handling the issue. It has been five days since the construction started. We have been told that the need to construct a wall arose because of security concerns,” Gokkan said. She indicated that she had heard about the building from reports circulating in the Turkish media and that the Nusaybin Municipality was not informed before the start of construction.

Gokkan said they were eventually told that a two-meter-wide and two-and-a-half-meter-high wall was being built in Nusaybin and that one meter of barbed wire would be built on top of the wall.

An official from Mardin province told Today's Zaman that the construction was not being performed by the province and that they do not have any information on the issue.

There are also allegations that another wall, which would be around two-and-a-half kilometers in length, will be built at the Oncupinar border gate in Kilis province, only 10 kilometers (6.2 miles) from the Syrian town of Azaz.

According to witnesses in the area, the reason for the wall's construction is to prevent deaths and injuries from stepping on landmines -- in just two weeks, at least three people have lost their lives to landmines.

Refugees, smugglers and rebel fighters have been bypassing the main gates and crossing the border, posing a major security challenge to Turkey. There have been increasing smuggling incidents on Turkey's border with Syria in recent months.

Many Syrians and smugglers have been killed on the Turkish border because of illegal crossings on mined terrain. It is believed that there are some 600,000 mines along Turkey's border with Syria, initially planted in the 1950s to deter smuggling.

Turkey, which is sheltering around 500,000 Syrian refugees, is dedicated to maintaining its open-door policy. However, it closes its gates from time to time when clashes at the Syrian border intensify.