Governor of north-eastern province of Trabzon said they expected 2,500 people to attend the religious mass at the Sumela Monastery on Sunday, August 15. 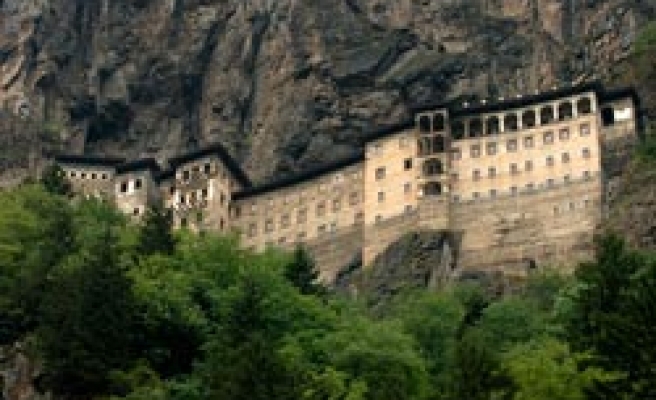 Governor of north-eastern province of Trabzon, Recep Kizilcik, said Friday they expected 2,500 people to attend the religious mass at the Sumela Monastery on Sunday, August 15.

Speaking to reporters on Friday, Governor Kizilcik said that they were expecting visitors from Greece, Russia, Georgia and different provinces of Turkey.

We do expect around 2,000 - 2,500 visitors on Sunday. With this mass, we want to give the message to the world that all beliefs and colors were valuable and holy, Kizilcik stressed.

Standing at the foot of a steep cliff facing the Altindere valley in Trabzon's Macka town, Sumela Monastery lies at an altitude of approximately 1,200 metres. Founded in the year 386 AD during the reign of the Emperor Theodosius I (375-395), legend has it that two priests undertook the founding of the monastery on the site after having discovered a miraculous icon of the Virgin Mary in a cave on the mountain.

The principal elements of the Monastery complex are the Rock Church, several chapels, kitchens, student rooms, a guesthouse, a library, and a sacred spring revered by Orthodox Greeks. The entrance to the Monastery leads up a long and narrow stairway.

The inner and outer walls of the Rock Church and the walls of the adjacent chapel are decorated with frescoes. The main subject of the frescoes are biblical scenes telling the story of Christ and the Virgin Mary.