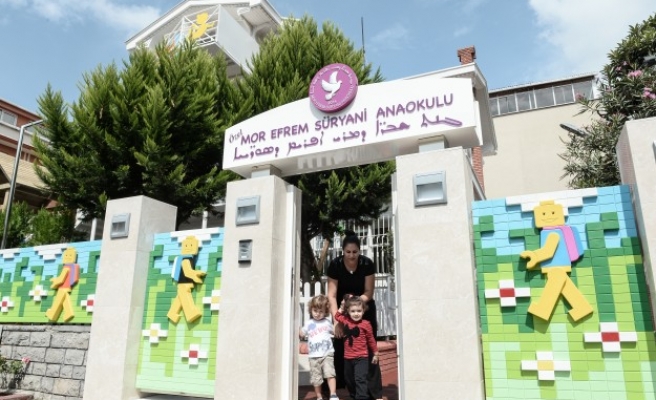 A private Assyrian nursery school in Istanbul's Yesilkoy neighborhood has been granted permission to officially start offering education to children, according to Turkish National Education Ministry.

The Mor Efrem Kindergarten is the first of its kind in Turkey, as the Christian minority is now allowed to educate students in its ancient Assyrian language after almost 90 years.

After the official permission, the mixed school – with a capacity of 60 students – can start the new term with around 15-20 students in the first intake.

The ministry's undersecretary Yusuf Tekin told The Anadolu Agency in an exclusive interview that the development was the result of the Turkish government's efforts as part of the democratization reforms since it came to power in 2002.

He added that they submitted the related documents on business license and work permit to Istanbul governor's office for the nursery - an educative subentity of the Virgin Mary Assyrian Church Foundation in Istanbul.

Tekin also reminded that a Greek school in the Aegean island of Gokceada started education last year after being granted a similar permit.

Assyrians are an ethnic group, whose origins lie in ancient northern Mesopotamia. Their language Assyrian – an Aramaic tongue – is one of the oldest in the world, with a history stretching back 5,500 years.

Unlike Armenians, Jews and Greeks in Turkey, Assyrians were not officially accepted as a ‘minority’ and were not able to benefit from minority rights until today, such as establishing their own school.

The community applied to an Ankara court in 2012 for permission to open their own schools. The court ruled that Assyrians should be accepted as a minority on the basis of Lausanne Treaty which defined the borders of modern Turkey in 1923. A legal ruling in June 2013 opened the way for Assyrians to open schools.

Community groups say there are 26,000 Assyrians living in Turkey. Around 20,000 of them live in Istanbul, while the others reside in the eastern Turkish cities of Adiyaman, Diyarbakir, Elazig and Mardin.