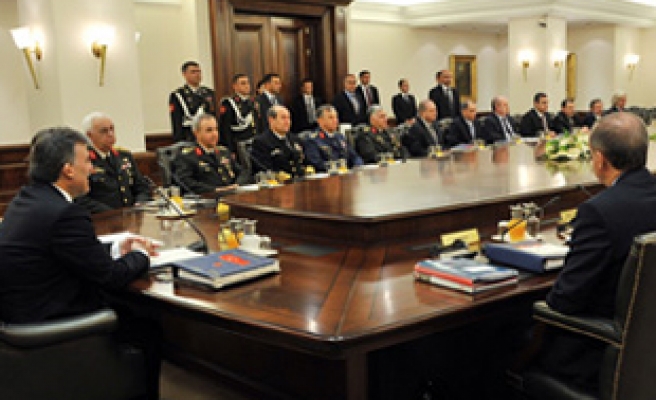 It is considered a reference to the 'state within the state' - comprising followers of U.S.-based congregation leader Fethullah Gulen - which is accused of trying to topple the government.

Wednesday’s meeting also saw a discussion of international developments -- including parliamentary elections in Iraq, a deal between rival Palestinian factions Hamas and Fatah, and the crisis in Ukraine, the statement said.

Members of the council expressed hope the elections would help solve ongoing issues in Iraq within the framework of democracy, while calling the Palestinian agreement a necessary element for permanent peace.

They also expressed concern over the crisis in Ukraine and its repercussions for the Crimean Tatars.

Chief Public Prosecutor's Office in Ankara has launched an investigation on Fethullah Gulen, U.S.-based Turkish congregation leader accused of leading an organization that seeks to topple the Turkish government.

An official from the prosecutor’s office said a process for gathering evidence was under way and it was too early to comment on the investigation.

The office said the files of the investigation were with Public Prosecutor Serdar Coskun from the department of "Crimes against the Constitution."

Seker told journalists in Ankara that he was there to obtain information on investigations and complaints against Gulen, some of which his legal team were not aware of due to technicalities.

The Turkish government accuses Gulen of forming and leading an organization that is nestled within state institutions, particularly in the judiciary and police.