Turkish PM Recep Tayyip Erdoğan proudly said Turkey has taken its place among 10 countries that can design and construct warships, as he introduced the warship. 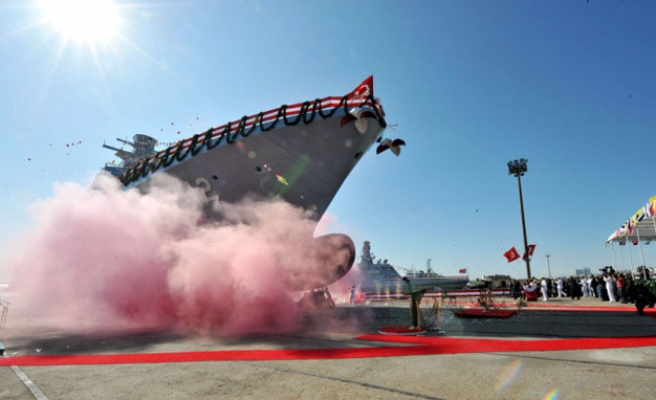 Turkey on Tuesday announced that its first domestically produced warship, the Heybeliada, is operational in a ceremony held at the İstanbul Naval Shipyard Command amidst ongoing tension over a Greek Cypriot drive to explore gas reserves in the eastern Mediterranean.

Speaking during the ceremony, Prime Minister Recep Tayyip Erdoğan proudly said Turkey has taken its place among 10 countries that can design and construct warships, as he introduced the warship.

Recalling that the Heybeliada, a patrol and anti-submarine warship produced by the İstanbul Naval Shipyard Command, was constructed in three years as part of the National Ship (MİLGEM) project, Erdoğan said he is pleased to see that the government did indeed take a correct step with the MİLGEM project.

The delivery of the Heybeliada to the Turkish navy comes amidst the country's efforts to protect its own interests in the eastern Mediterranean in the face of a gas row with the Greek Cypriot government.

Turkey has decided to begin its own gas exploration project in the eastern Mediterranean and to boost its military presence in the region after the Greek Cypriot government vowed to go ahead with its plans to drill for gas south of Cyprus. Last week, Turkey marked its marine borders with Turkish Cyprus for offshore oil and gas drilling and a Turkish seismic research ship began exploring for gas on Tuesday near Cyprus.

Turkey said Turkish naval ships could escort Turkish energy exploration ships in the Mediterranean, raising the possibility of a naval confrontation. "We will try all channels of peace but we will also protect our country's interests until the end," Erdoğan said during the ceremony commenting on the gas row.

Turkey also earlier vowed to take measures to ensure freedom of navigation in the eastern Mediterranean in the face of Israel's refusal to apologize to Turkey over a deadly raid in 2010 on an aid ship trying to break the blockade of Gaza, which resulted in the deaths of eight Turks and a Turkish-American.

Erdoğan said earlier that Turkish frigates and assault boats might be sent to the eastern Mediterranean at any time to ensure freedom of navigation, raising the possibility of a naval confrontation with Israel.

Tuesday's ceremony also marked the sending of the MİLGEM project's second ship, Büyükada, to sea for trial. The MİLGEM project stands as a turning point for Turkey, as it marks the first corvette-class warship designed by Turkish naval engineers.

Both the software and hardware of the corvette's war management systems were also developed domestically and much of the equipment was designed by domestic companies. Around 38 Turkish private sector companies were involved in the production of the Heybeliada's sub-systems. The prototype cost close to $260 million to build.

The construction of the Heybeliada began on Jan. 22, 2007 and it has undergone comprehensive sea trials since 2008. Harpoon missiles as well as RAM PDMS air-guided missile defense systems are among the warship's features.