The historical "Ortahisar Castle" in Capadoccia will be re-opened to visitors after a renovation process. 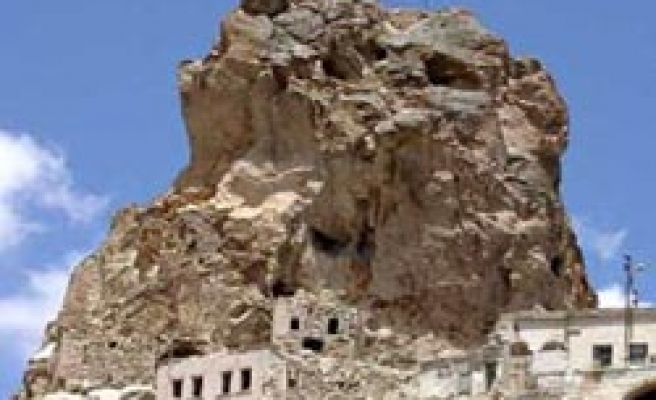 The historical "Ortahisar Castle", located on one of the biggest chimney rocks of Turkey's popular touristic region Cappadocia, will be re-opened to visitors after a renovation process to be jointly carried out by Middle East Technical University (ODTU) and Ortahisar Municipality.

Speaking to AA on Wednesday, Ortahisar Mayor Ali Ihsan Ozendi said that the 86-meter high Ortahisar Castle, carved into a chimney rock, had been closed to visitors 6 years ago as it was dangerous to enter the castle due to the risk of collapse.

Noting that such restriction caused a decline in the region's tourism, Ozendi said his municipality had recently signed an agreement with ODTU for the preparation of a project for restoration of the historical castle.

Ozendi said the project would be put into practice soon and the castle would continue to contribute to Turkey's tourism.

Cappadocia, which is unique in the world and is a miraculous nature wonder with its famous "fairy chimneys", is the common name of the field covered by the provinces of Aksaray, Nevsehir, Nigde, Kayseri and Kirsehir in the Central Anatolian region.

The Cappadocia region is largely underlain by sedimentary rocks formed in lakes and streams, and ignimbrite deposits erupted from ancient volcanoes approximately 9 to 3 million years ago.

Ortahisar means "middle castle," and as its name implies, it is central among the Cappadocian towns of Goreme, Urgup, Uchisar and Nevsehir, and only a few kilometers from the Goreme Open Air Museum.

Ortahisar is famous for its friendly inhabitants, picturesque stone houses, narrow streets and lovely churches as well as the castle-like rock formation after which the town is named.

This natural fortress known as" Ortahisar Castle" is a prominent landmark in the region which offers a magnificent panorama over the fairy chimneys and the snowy peak of Mount Erciyes.