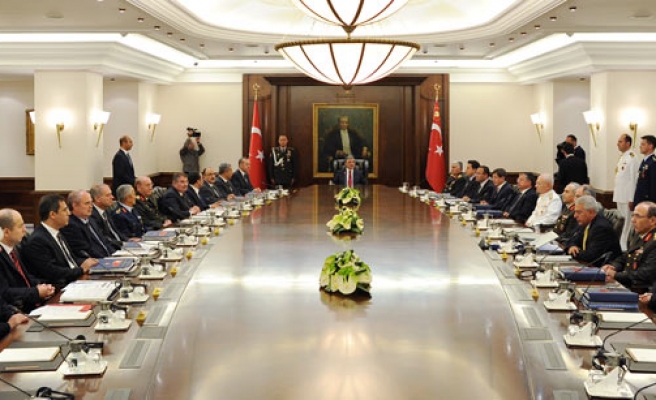 Turkey’s National Security Council has emphasized the government’s “resolute will” to achieve peace in neighboring Syria, the body said in a statement on Wednesday night.

The council - chaired by the president and including the armed forces’ chief and Cabinet ministers - was meeting for the first time since a caretaker government was put in place last week.

“The meeting reviewed border security measures and confirmed Turkey's resolute will and stance on enabling an environment of peace and security in Syria, including joint action with the international anti-ISIL coalition,” the council said which stressed Turkey's determination to continue the campaign against ISIL and other terrorist organizations based in Iraq and Syria.

Addressing the refugee crisis affecting Europe and the Mediterranean region, the council noted Europe’s “ominous” handling of the influx of refugees and the need for a solution that respected human rights.

It called for the establishment of a “terror-group-free zone” within Syria as a key development for the “preservation of the Syrian people's right to life.”

Many refugees heading for Europe are fleeing Syria’s civil war, now in its fifth year, and Turkey is sheltering 1.7 million Syrians. Ankara has pressed for the creation of a safety zone across its southern border in an area currently controlled by ISIL.

Turning to the renewal of the Kurdish conflict in Turkey’s southern and eastern provinces, the council said the violence would never “disturb the environment of peace and tranquility or cripple the Turkish people's age-long brotherhood and will to live together.”

The 31-year conflict with the Kurdistan Workers’ Party (PKK) had been on hold for two-and-a-half years as the “solution process” was underway but the fragile cease-fire was shattered following a suicide bombing on July 20.

The PKK is listed as a terrorist group by Turkey, the EU and the U.S.

“We noted the need for close cooperation in international public opinion in counter-terrorism efforts,” the statement added.

The council also discussed recent arrests linked to the “Gulenist Terror Organization” - the movement led by U.S.-based preacher Fetullah Gulen that the government accuses of plotting to overthrow the Turkish state.

Police raids in Ankara and Istanbul have targeted the premises of Koza Ipek Holding, a conglomerate with interests in the media, mining, construction and tourism. Police sources said however the raids did not target the holding's media organizations.

The statement said Turkey was determined to fight against the “parallel state” - a term used to describe the Gulen movement’s alleged attempts to infiltrate state institutions - in Turkey and abroad, “including the illegal economic aspect of the issue.”

The Turkish state "will not allow for any illegal organization or act in the country,” the council said.

The council also heard about efforts to ensure the Nov. 1 general election is conducted peacefully to provide a “reflection of the people's will… free from any pressure.”