Turkish minister faced reactions after the official report that neglected the ban on rights of girls and women who wear headscarf during U.N. meeting. 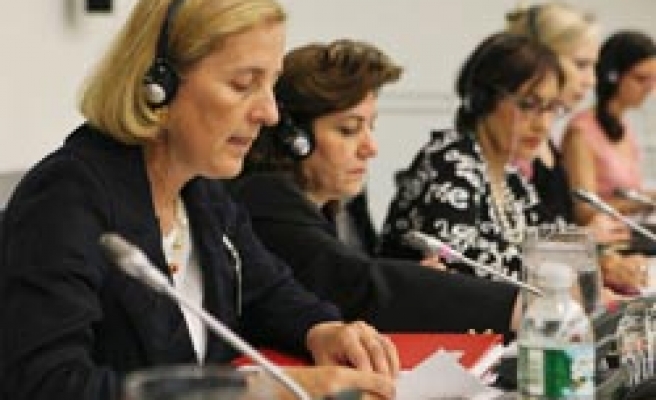 Turkish minister, who is the second female minister in the cabinet, faced reactions after the official report that neglected the ban on rights of girls and women who wear headscarf during U.N. meeting on women-men equality.

Turkish State Minister Selma Aliye Kavaf attended a United Nations (UN) meeting within the framework of the Convention on the Elimination of All Forms of Discrimination against Women (CEDAW) and defended Turkey's relevant report titled "6th Term Report".

Speaking to the CEDAW delegation, Minister Kavaf said that Turkey had the determination to deal with discrimination against women and to facilitate the equality of women and men, according to Anadolu Agency.

Touching on girls' problems in the educational sector of Turkey, Kavaf said that "problems for girls continue, however, Turkey has made great progress in educating girls in the past several years".

But she did not mention the problems of headscarved female students.

Kavaf-lead Turkish delegation defended the report that says "There is no pressure on the women about their wearings in Turkey." But a Turkish lawyer opposed the remarks.

Lawyer Fatma Benli offered another report on violation of rights of headsacrved students and women to the CEDAW. The report consisted of signatures from 71 Non-governmental organizations (NGOs).

NGOs said that with such "violations", Turkish state did not fulfill its responsibility to the agreement that Turkey signed.

After the session of CEDAW, Benli said that such remarks which was cited by Turkish Parliament Committee on Equality of Opportunity for Women and Men, did not reflect the truth.

Thousands of female students were disfranchised from their education rights, she said.

On the opposition, Kavaf confirmed that such ban did not legally under the Constitution but it was in the practice.

Turkey still insists on imposing headscarf ban as a country whose population is 99 percent Muslim and majority of women wear headscarf as a religious practice.

Meanwhile, Minister Kavaf said that the Constitutional amendment package adopted at the Turkish Parliament in April-May 2010 carried crucial changes from the perspective of women and men's equality.

While the participation of women in Turkish labor force in 2005, the year of our previous report, was 23.3 percent, this figure jumped to 26 percent in 2009, Kavaf underlined.

But Benli said she was a lawyer but she could not enter the courts for trials because of wearing headscarf. Also, headscarved women were disfranchised from work oppotunities.

Turkey imposes also the ban at all public domain.

Turkey's ban on headscarves at universities dates back to the 1980s, but was significantly tightened after Feb. 28, 1997, when army generals with public support ousted a government they deemed too Islamist. The ruling Justice and Development Party (AK Party) attempted to lift the ban earlier last year, a move that was cited as evidence when a closure case was filed against the party on grounds that it had become a focal point of “anti-secular activities.”

The TCK Women’s Platform and CEDAW Civil Society Implementation Board together comprise 20 women’s NGOs, six influential women’s platforms active nationwide, and 135 local and other women’s organizations. The groups will participate as the Women’s Organizations Delegation to the CEDAW Reviewing Turkey session, hoping to bring women’s voices on gender issues to the gathering. Meanwhile, the government delegation will be led by the state minister responsible for women and family, Selma Aliye Kavaf, who will present the government’s report.