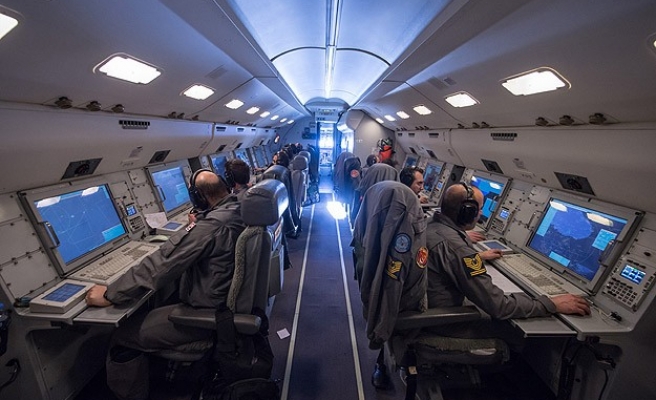 "We have full confidence in our engineers, technicians and companies, and therefore started strategically important projects for land, sea and air systems in Turkey,” Recep Tayyip Erdogan said during his speech at the “Peace Eagle” aircraft’s delivery ceremony at Konya's Air Force Command Center.

Not only is the "Peace Eagle” Turkey's first airborne early warning and control aircraft (AEW&C), it is superior to other such aircrafts due to its newer technology, Erdogan added.

Turkey purchased four warning and control aircrafts from aviation giant Boeing, and the fourth will arrive in 2015.

An AEW&C can fly non-stop for eight to ten hours on average, and its flight duration can increase up to 20 hours with one stop for refueling.

“It is very important that our aircrafts are joining our air force in a period of conflicts and instability in our region,” the Turkish PM said. "The events in our region show it is very crucial that our defensive abilities are high, even more than ever.”

Turkey's defense systems producer Aselsan has signed a US$491.5 million deal with Turkey's Aerospace Industries (TAI) for a delivery of Utility Helicopters.

The Utility Helicopter T-70, is based on the international version of Sikorsky’s renowned S-70 platform.

Deliveries under the contract are scheduled between 2018-2025, the company said in a statement.

The agreement includes options that analysts say could result in billions of dollars of additional orders over the next three decades.

The 109 helicopters, a version of Sikorsky's popular Black Hawk, will be assembled in Turkey. The main contractor is Turkish Aerospace Industries with components to be supplied by Sikorsky, Aselsan and other Turkish companies.

Sikorsky said the deal marked the start of an important partnership with Turkish industry.

"Turkey is such an important market in terms of being a large customer, and it is also strategically important in terms of who they are in the world," Sikorsky President Mick Maurer said in a telephone interview.

He said the agreement would allow Turkish industry to develop the capability to produce nearly every part of the helicopter, including a newly designed Turkish cockpit.

Maurer declined to give many details about the new agreement but said it would give his company a second source for many of the helicopter's components.

He said Sikorsky would work with Turkey to market the international version of the Black Hawk in other countries, leveraging Turkey's existing relationships in those areas and generating additional orders for Turkish suppliers.

"We're going out arm in arm, as we bring in other sales outside of Turkey that will be supplied by the new supply chain," Maurer said.

Maurer said the company expected continued demand for the helicopter in Asia, the Middle East and Europe.

Sam Mehta, president of Sikorsky's Defense Systems and Services division, said the deal marked the start of a 30-year relationship, and included options for a wide range of Turkish government agencies to buy versions of the helicopter.

It also opened opportunities for servicing and repairing the helicopters, he said.