Turkish fire-fighters battled to contain a raging fire on a pipeline carrying about a quarter of Iraq's crude oil exports, officials said. 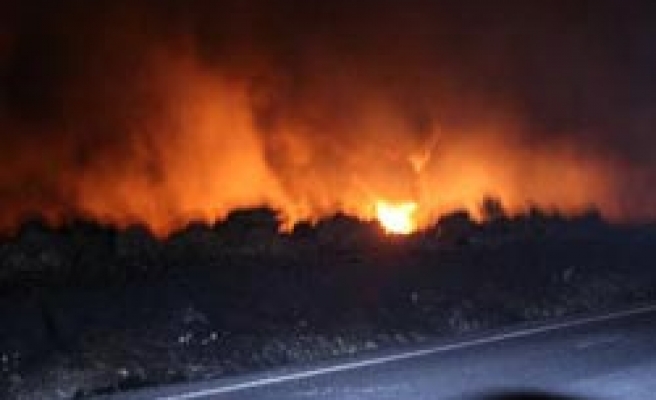 Turkish fire-fighters on Wednesday battled to contain a raging fire on a pipeline carrying about a quarter of Iraq's crude oil exports, a day after an explosion blamed on PKK militants, officials said.

The bomb attack stopped the flow of oil on Tuesday on the Kirkuk-Ceyhan pipeline and killed two people and wounded a third after their vehicles caught fire on a road that runs alongside the link.

"The fire continues, and the flow of oil has been halted. Efforts are centred on putting out the flames," said a spokeswoman for Botas, Turkey's state-run pipeline operator.

The bombing, which occurred about 100 kilometres (62 miles) from the Iraqi border on Tuesday at 1530 GMT, was the second attack on the pipeline in Turkey in less than two months.

Officials blamed the PKK for the latest bombing too.

Sabotage against the crucial energy corridor is still comparatively uncommon on the Turkish side of the border.

Investigators on Wednesday defused two other bombs discovered along the pipeline near where the blast occurred, according to security officials, who declined to be identified.

A source from the Iraqi state-owned North Oil Company (NOC), which operates the Kirkuk field, said daily oil exports through the pipeline had recently been at 350,000 to 450,000 barrels per day.

The source said pumping through the pipeline is expected to resume only after it has been repaired.

The 960 kilometre Kirkuk-Ceyhan link consists of two parallel pipelines and carries an average 500,000 barrels of oil a day to Ceyhan, where it is loaded onto tankers.

When the larger, main line is damaged, Iraqi officials can use different pumping stations located along the route within Iraq to switch the flow of crude to the other line, oil industry sources have said.

One shipper said he was informed that efforts are underway now to switch oil from the larger pipeline to the smaller one and that the flow may resume later on Wednesday.

The PKK in the past has targeted strategic assets such as railways and pipelines.

Violence has risen this year after the militants called off a unilateral, 14-month ceasefire in June.

More than 100 military personnel have been killed since March, already exceeding the death toll in all of 2009.