Speaking at rally against terrorism, Recep Tayyip Erdogan promises to 'never take a step back' 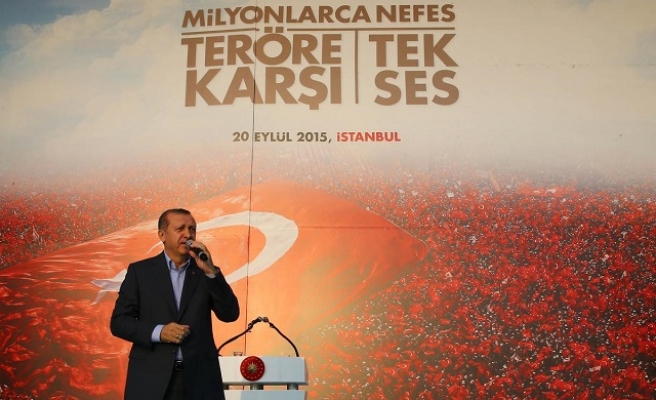 “I assure all that Turkey will never take a step back from the point it has reached,” Erdogan told crowds at an anti-terrorism rally in Istanbul. “We will not allow any reverse of the process of national unity and brotherhood.”

Tens of thousands of flag-waving Turks gathered in the city’s Yenikapi Square for the rally - held under the banner “Millions of Breaths. One Voice Against Terror” - in response to the latest wave of terrorist attacks.

Erdogan pledged to hunt down terrorists. “We are determined to strengthen democracy and protect rights and freedoms,” he said.

Also addressing the crowd, Prime Minister Ahmet Davutoglu said the “struggle” against terrorist groups would “go on day and night” until “our mountains and cities are cleared of these terrorists."

Calling on citizens in Turkey’s Kurdish-majority east and southeast to “believe in the Turkish state”, Davutoglu said the security forces had been “doing their duty meticulously during the operations so that no citizen is harmed.”

Parliamentary Speaker Ismet Yilmaz promised that everyone would be able to cast their votes “freely” in the Nov. 1 general election - a rerun of the June election that saw the ruling Justice and Development (AK) Party lose its majority and plunge the country into political uncertainty.

"We will certainly keep democracy and freedoms alive as we are heading towards November 1 elections where all will cast their votes freely," he said.

Turkey has been subjected to a wave of terror attacks since late July, when the terrorist organization PKK renewed its armed campaign in the wake of a suicide bomb blast in Suruc, Sanliurfa province, that killed 33 pro-Kurdish activists.