The three Istanbul 'aristocrats' all dropped points in week two of the Super League, a huge triumph for the rising Anatolians. 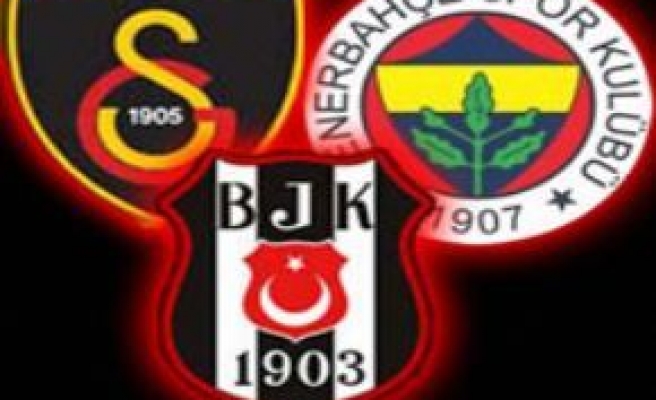 
The three Istanbul ‘aristocrats' -- Galatasaray, Fenerbahce and Besiktas -- who have dominated the Turkish league for years, all dropped points in week two of the Super League, a huge triumph for the rising Anatolians.

Everything that has a beginning has an end, and every end is a new beginning. And so the end, or more precisely the decline, of the Istanbul “aristocrats” -- Galatasaray, fenerbahce and besiktas -- is a new beginning for Anatolian football teams.

The Trabzonspor Black Sea Storm swept away the visiting Yellow Canaries 3-2 in their Spor Toto Super League week two match at the Huseyin Avni Aker Stadium on Monday night to complete a triumphant week for Anatolia and a really miserable one for Istanbul.

“We are playing well and winning,” Trabzonspor coach Senol Gunes said after the match. “The sad thing is that injuries continue to creep in, but this will never dampen our enthusiasm. We will keep up the fight,” he added.

The week 2 Super League episode began on Saturday night, when Istanbul Buyuksehir Belediyespor -- more Anatolian than Istanbulite because of its shoestring budget -- bashed the besiktas Black Eagles 2-0 away at the BJK Inonu Stadium.

Then Bursaspor, the defending Turkish champion, jumped on the Istanbul humiliation bandwagon the following day by beating the Galatasaray Lions away by 2-0 at Istanbul's Ali Sami Yen Stadium.

And on Monday night the Storm outwitted and outscored the fenerbahce Yellow Canaries 3-2, sending them home with their heads tucked under their wings and proving categorically to the Istanbul monarchs that the end of their long reign may be fast approaching, because no empire reigns forever.

All goals scored in first half

All five goals in the Trabzonspor-fenerbahce match were scored in the first half. New fenerbahce coach Aykut Kocaman, partly because he was wary of the tough-tackling Storm and partly because he is still experimenting with his starting lineup, decided try the now-outmoded 4-4-2 system -- with captain-playmaker Alex de Souza and newly signed Slovakia striker Miroslav Stoch on the bench.

The 30-something de Souza may be fighting an uphill battle against age and gravity, but the truth of the matter is that he remains the best dribbler and passer on the Fener team. His absence in the starting lineup meant there was a huge gap between midfield and offense.

The Trabzonspor Black Sea Storm quickly moved into the void and were rewarded after only 14 minutes when Topuz, due to immense pressure, scored an own-goal.

Guinean winger Ibrahim Yattara, who has fully recovered from the injury that sidelined him throughout last season, doubled the score for the Storm two minutes later with a bullet shot from inside the box. But Uruguay defender Lugano's header goal from a free kick in the 28th reduced the tally for Fener to 2-1.

Poland defender Arkadiusz Glowacki increased the Storm's lead to 3-1 just a minute later, heading home a free kick from Yattara. But the bad news is that the Pole was injured in this match and will be out for several weeks.

Semih was injured in the 39th and replaced by Stoch, who produced a measured pass in the 42nd for Topuz to score for Fener and make the tally 3-2. But that goal was not at all enough to turn Topuz from villain to hero.

“We lost and, therefore, we are not happy,” Kocaman said. “In the league you either win, draw or lose. We won last week and lost today. In other words, we have lost this, battle but not the war,” he further emphasized.

Kocaman brought de Souza in place of Baroni 15 minutes before the end of regulation time (75th), but it was just too late for the disillusioned Brazilian to do any good. The Storm then held on for a well-deserved win -- and that was the end of the story.

Monday's win was a much-needed morale booster for the Storm ahead of its UEFA Europa League playoff second-leg match at home against EPL great Liverpool on Thursday. But the same cannot be said about the Canaries and the Lions, who face uphill battles against PAOK of Greece and Ukraine's Karpaty Lviv, respectively. besiktas has a good chance away against HJK Helsinki, having won 2-0 at home in the first leg.

A look at the domestic Super League standings shows that the rise of Anatolia is no fluke. Trabzonspor, Bursaspor and Kayserispor are on top with maximum points, followed by Sivasspor with four from one win and one draw.

As is known, Bursaspor won its maiden league title last season and Trabzonspor took home the Turkish Cup and the Super Cup this year. Anatolia is winning trophy after trophy and it appears there will be no turning back.