World's longest tunnel aquarium hosts more than 10,000 species of fish and sea creatures from all around the globe. 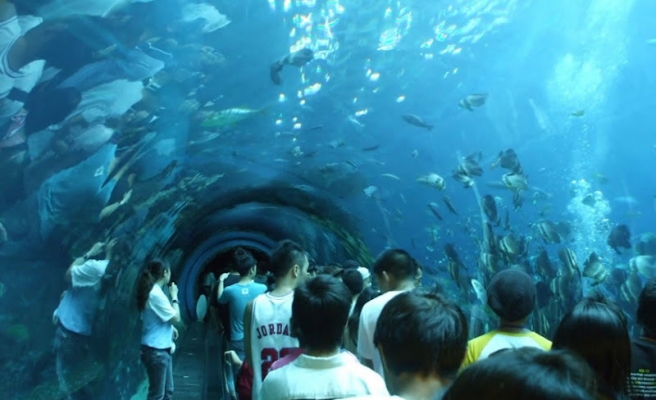 World Bulletin / News Desk
Not content with being one of Turkey’s top tourism spots, the country's coastal Antalya province has now gone one better - it hosts the world's longest tunnel aquarium.
The tank containing the 131-meter long, 3-meter wide tunnel hosts more than 10,000 species of fish and sea creatures from all around the globe.

Visitors watch as fish swim around life-sized replicas of an Italian warplane that crashed into the Mediterranean during World War II, a ship and submarine wrecks.

The complex housing the main tank contains over 40 theme tanks, with titles such as “World Oceans,” “Turkish Seas” and “Three Islands,” and was built on a 30,000 square-meter area.

Kemal Kumkumoglu, the aquarium's chief-executive-officer, said: “In terms of its tank capacity, the aquarium is the world’s fifth largest, and Europe’s second largest one."

The complex is expected to soon become a member of the European Association of Zoos and Aquaria (EAZA), which will help staff share international know-how and address any health and adaptation problems suffered by its water-dwelling inhabitants.
Last Mod: 30 Ocak 2014, 11:44
Add Comment