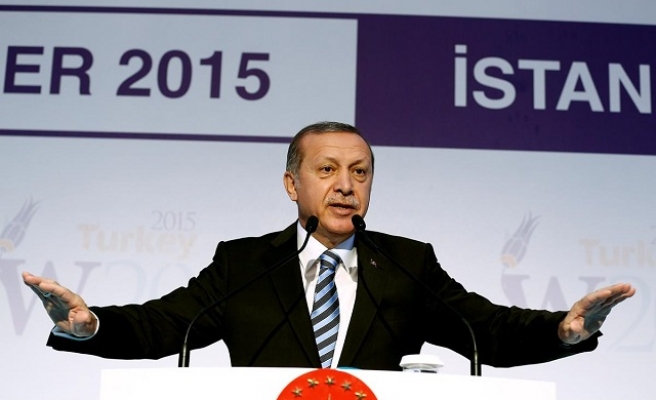 Turkish President Recep Tayyip Erdogan on Friday mocked the EU's contribution to easing the Syrian refugee crisis, saying the bloc had been awarded the Nobel Peace Prize for accepting just a tiny number of asylum-seekers.

Speaking after Turkey and the EU agreed a plan for improving the handling of the refugee crisis, Erdogan also questioned whether Brussels treated Ankara's long standing membership application seriously.

"They announce they'll take in 30,000 to 40,000 refugees and then they are nominated for the Nobel for that. We are hosting two and a half million refugees but nobody cares," Erdogan said.

"Because the Nobel is politically motivated. You know how Nobel prizes are being awarded, they are being awarded upon (someone's) order. It doesn't matter whether one deserves it or not," Erdogan said.

German Chancellor Angela Merkel had been tipped to win this year's prize for her leadership on the refugee crisis in Europe.

The EU won the Nobel Peace Prize in 2012 for its commitment to "peace and reconciliation, democracy and human rights".

Erdogan was speaking to a meeting of the W20, an offshoot of the G20 which Turkey is chairing this year. It aims at boosting the role of women in the global economy.

EU leaders approved Thursday a plan with Turkey aimed at stemming the flood of migrants who fled the Syrian and other crises for Turkey, in return for concessions from Brussels.

But Erdogan still accused the EU of failing to share the burden.

He complained that Turkey has so far spent $8 billion on hosting the refugees --  2.2 million Syrians who fled the four-and-a-half year conflict in their country and also 300,000 Iraqis.

"They keep saying 'We can't do without Turkey.' It's very clear but they are not being clear. Then why don't you let Turkey in the EU?" Erdogan said.

"Many EU countries are far behind us... We are more advanced in terms of economy and (meeting) the membership criteria. But unfortunately, they are not being sincere."

Erdogan offered no direct reaction to the agreement of the action plan.

Merkel is due to visit Turkey on Sunday for talks with Erdogan on the migration crisis.

Almost 600,000 people have arrived in Europe so far this year, with many of them heading for Germany and Sweden.