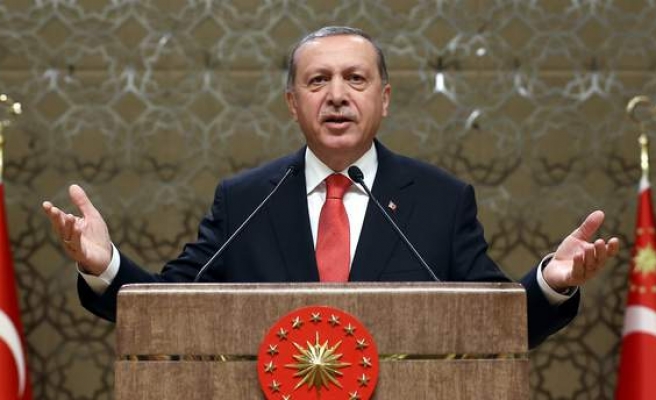 Turkish President Recep Tayyip Erdogan on Wednesday called on world leaders to rally behind Turkey's plan for a safe zone inside Syrian territory, days before it hosts the G20 summit.

Speaking to a group of businessmen in the capital Ankara, Erdogan said the Syrian conflict would be a "major topic" at the G20 summit in the Mediterranean resort of Antalya on Sunday and Monday.

US President Barack Obama, Russian President Vladimir Putin and Saudi King Salman are among the world leaders attending the meeting.

Erdogan has repeatedly pressed for a safe zone inside Syria stretching down from Azaz and Jarablus in the north, which could house some of the 2.2 million Syrian refugees currently hosted by Turkeyand act as a buffer to protect Turkish territory.

The idea has met with only a lukewarm response from world powers but there have been indications fromAnkara in the last few days that the West is coming closer to its point of view.

"More realistic steps need to be taken for a solution including our proposal in particular to establish a safe zone cleared of terror," Erdogan said.

He implied that the area would be cleared of both the ISIL and Syrian Kurdish fighters, whom Ankara accuses of being a Syrian offshoot of the outlawed Kurdistan Workers' Party (PKK) which has waged a bloody war for self-rule in Turkey's southeast.

It remains unclear how the zone would be set up, although Turkish press reports have not ruled out a ground operation by Turkish troops.

Turkey says it has so far spent $8.5 billion dealing with the refugees, accusing the European Union of failing to share the burden.

Ankara is holding talks with EU leaders to deal with the migrant crisis, which has seen hundreds of thousands of people land on Europe's shores this year -- most of them making risky sea crossings fromTurkey.

European Commission vice-president Frans Timmermans is due to meet on Wednesday with Prime Minister Ahmet Davutoglu and Foreign MinisterFeridun Sinirlioglu in Ankara.

"International aid would only facilitate our job and help us provide better service," Erdogan said.

"We would use the money coming from there not to put it in our safe but to upgrade the quality of our services," he added.