Turkey will live an historic day on Wednesday as the country's first national earth observation satellite, RASAT, will be launched to space. 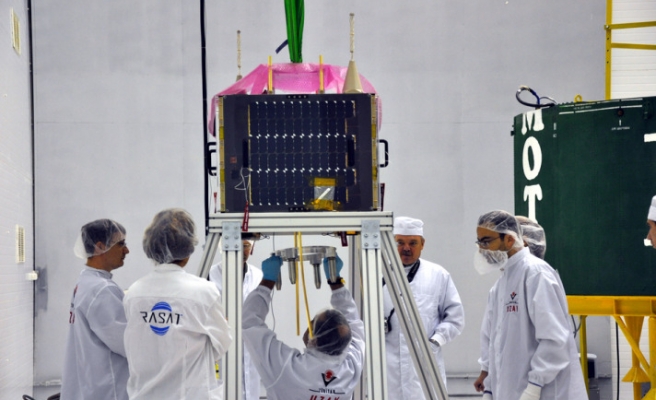 Turkey will live an historic day on Wednesday as the country's first national earth observation satellite, RASAT, will be launched to space.

The project was funded by the State Planning Office.

RASAT is a Turkish word with a basic meaning of "observation". There are connotations to Rasat as well, for instance the term "Rasathane" means 'astronomical observatory'. Hence, it was felt that "Earth Observation Satellite" was a most fitting interpretation of RASAT.

RASAT was the first remote sensing satellite that was developed and manufactured in Turkey by Turkish engineers.

One of the purposes of the RASAT program was to further improve the infrastructure required to assemble, integrate and test small satellites in Turkey without receiving any foreign resources in terms of advisors or partners.

The RASAT project started in 2004.

All design, manufacture and test phases of RASAT were carried out by Turkish people and the project aims to testing the satellite systems designed and developed by TUBITAK UZAY in the space and providing these systems with a heritage so that they can be used in other national satellite missions in the future.

The satellite images provided by RASAT will also be used in urban and regional planning, forestry, agriculture, disaster monitoring and for other similar purposes.

RASAT will be launched to space from the Yasny Base of Russia at the Kazakh border. The satellite will be in orbit 700 kilometers away from earth.