Turkish Foreign Minister Ahmet Davutoglu rejected the labelling of Turkey as a country "not free" for press. 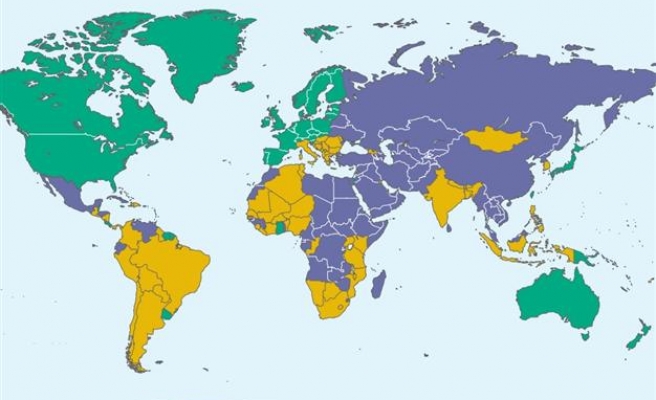 Answering journalists’ questions Friday after a bilateral meeting with his Omani counterpart Yusuf bin Alawi in Ankara, Davutoglu said Turkey was not comparable to the other countries in the same bracket.

According to the Freedom House report for press freedom in 2013 released Thursday, Turkey saw the biggest setbacks in press freedom and became the only country in Europe to be designated "not free."

"Turkey remained the world’s leading jailer of journalists in 2013, with 40 behind bars as of December 1, according to the Committee to Protect Journalists," the report said.

Davutoglu refuted such a number, saying there are 17 jailed journalists, 13 others in ongoing trials and 12 who have been released as of May 2 2014.

"These people were jailed because of their illegal acts and coordinating with terrorist organizations. The report does not even mention the twelve released journalists, this is an operation to change perceptions towards Turkey," said the Turkey's Foreign Minister.

The report concluded that globally there had been a shift towards less freedom for the press, compared to previous years. It also said the majority of downgrades in various countries were because of government and private sector pressure on press freedom.

On April 18 the Gulf Cooperation Council announced that they had fully recovered from last November's disagreement between the members when United Arab Emirates (UAE), Saudi Arabia and Bahrain called their envoys from Qatar over its support for the Muslim Brotherhood, a group labeled a "terrorist organisation" by Saudi Arabia and the UAE.

Alawi said the tension is over and the countries are working on how to rejuvenate the diplomatic relations.

"It was a disagreement between the family members, not something that would danger the common benefits or fundamental principles of the cooperation," Alawi said.

The two ministers both agreed on Turkey's United Nation's Security Council membership being supported by Oman and on cooperation in the Arab League and the Gulf Cooperation Council.