Abdullah Gul said the force commanders who had filed for retirement had already reached their retirement age. 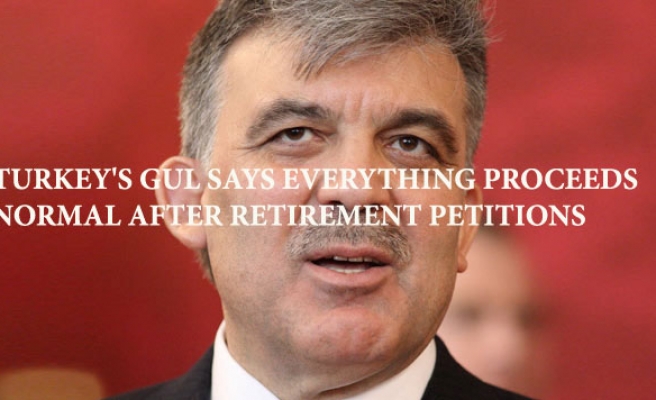 The Turkish president said on Saturday that everything proceeded in its normal course after the latest retirement petitions filed by Turkey's top commanders and there was currently no disorder in the army administration.

Commenting on Turkey's General Staff Chief Isik Kosaner's filing for retirement along with the country's land, naval and air force commanders yesterday, Turkish President Abdullah Gul said, "as you see, everything proceeds in its own course and there is no gap in chain of command."

Describing Kosaner as a respected and valuable commander, Gul said he had asked the former army chief to remain in office, however, he had eventually respected the general's decision to quit.

Gul also said the force commanders who had filed for retirement had already reached their retirement age.

Pointing to yesterday's prime ministry statement on the developments, Gul said the Supreme Military Council would convene as scheduled and would continue to discuss the issues on its agenda, including the promotions of army members, as planned.

"Nobody should think that Turkey is going through a crisis. What happened yesterday was surely extraordinary, however, everything is back on track and normal procedures will be implemented," he said.