The teams had to slow down their efforts at night but sped up again early on Wednesday morning. 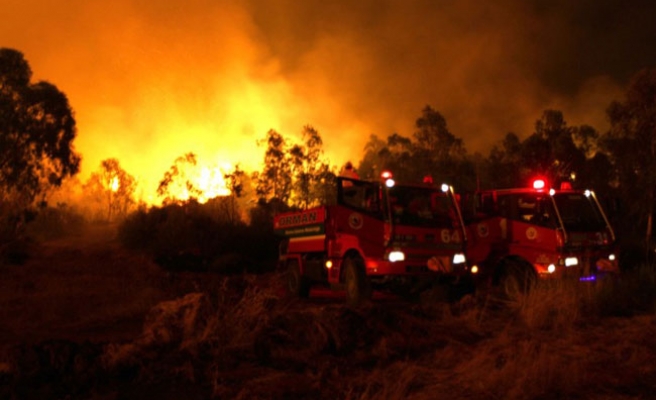 Four simultaneous forest fires that broke out on Tuesday in the western province of İzmir, consuming a total of 208 hectares, were likely caused by arson, according to the governor of İzmir province.

As the fires have been brought under control amidst fears that the fire would spread to a nearby village, İzmir Governor Mustafa Cahit Kıraç said the simultaneous occurrence of the fires causes him to suspect the possibility of arson.

Three suspects, alleged members of the PKK, had earlier been arrested on charges of causing two forest fires in İzmir last week.

Meanwhile Turkish officials said cooling efforts in the area, both from the air and by land, are still under way. Firefighting teams from the İzmir Regional Forestry Directorate, as well as teams from Manisa, Aydın, Muğla, Kütahya, Balıkesir and Afyonkarahisar, worked all day long on Tuesday to contain the fire.

The teams had to slow down their efforts at night but sped up again early on Wednesday morning. Firefighting planes and helicopters also assisted the teams and tried to contain the fire with water from the Ürkmez reservoir. The fire was finally brought under control on Wednesday.

There were fears that the flames could spread to the village of Payamlı; however, the fire was almost contained only a few kilometers from the village. Villagers were relieved that the blaze had not caused any damage to their homes.

As for the reason for the fire, villagers said it is unknown but there are rumors of arson. Turkey topped the list of countries in Europe that suffered from forest fires in 2008, during which a total of 29,749 hectares of forest were destroyed in 2,135 fires.

Thanks to a rapid action plan adopted by the Ministry of Environment and Forestry, the following year saw far less vegetation vanish due to fires. According to a report issued by the ministry in April 2010, the number of fires in 2009 was 1,793 and the amount of forested areas destroyed dropped to 4,679 hectares, considerably less than in 2008.