Chief of General Staff General Isik Kosaner stepped down on Friday evening along with the army, navy and air force commanders. 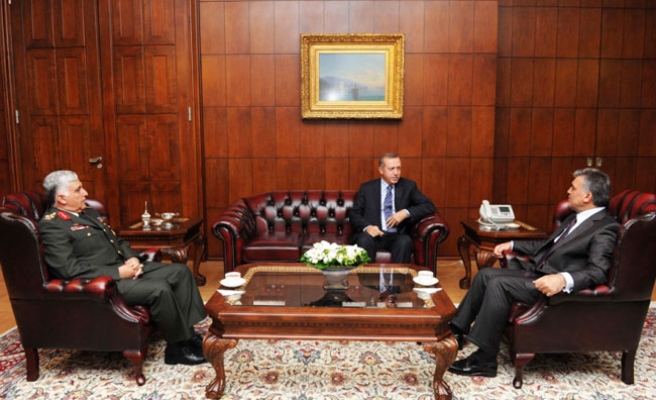 Turkey faced turmoil within its military on Saturday after the country's four most senior commanders quit in protest over the detention of 250 officers on charges of conspiring against Prime Minister Tayyip Erdogan's government.

Chief of General Staff General Isik Kosaner stepped down on Friday evening along with the army, navy and air force commanders, plunging NATO's second largest armed forces into uncertainty shortly before a senior promotions board convenes.

In a farewell message to "brothers in arms", Kosaner said it was impossible to continue in his job as he could not defend the rights of men who had been detained as a consequence of a flawed judicial process.

"Four-star earthquake," a headline in Sabah newspaper said of the generals' decision, while papers also highlighted Kosaner's criticism of media reporting on the military.

"They tried to create the impression that the Turkish Armed Forces was a criminal organisation and ... the biased media encouraged this with all kinds of false stories, smears and allegations," Kosaner's statement said.

The subordination of the generals was starkly demonstrated last year when police began detaining scores of officers over "Operation Sledgehammer", an alleged plot against Erdogan's government discussed at a military seminar in 2003.

A court accepted on Friday an indictment on another alleged military plot, known as the "Internet Memorandum" case, and prosecutors sought the arrest of 22 people including the Aegean army commander and six other serving generals and admirals.

The detentions have sapped morale and spread mistrust and suspicion among the officer corps, and many had been looking for Kosaner to take a stand since his appointment last August.

The resignations of Kosaner and the others could give Erdogan a chance to fill the top brass with officers more friendly to his party, raising the possibility of more officers retiring early, or quitting.

Erdogan marked out Kosaner's successor on Friday, as his office put out a statement naming paramilitary Gendarmerie commander General Necdet Ozel as new head of land forces, and acting deputy chief of general staff, effectively making him next in line when Kosaner handed over the baton.

The statement said the four commanders had retired and made no mention of the reasons why. It said a meeting of the Supreme Military Council, which meets twice-yearly to make top appointments, would go ahead as planned on Monday, showing Erdogan is in a hurry to restore the chain of command and present an image of business as usual.

Though well used to Turkey's turbulent politics, investors can easily take fright given the fragile state of world markets.

Just last week the central bank was forced to take steps to halt a sharp fall in the lira currency due to concern over the vulnerability of the Turkish economy to external shocks.