Both teams struggled to find their feet, in fact, and the first shot at goal did not come until the 21st minute when Trabzonspor midfielder Didier Zokora fired over the bar. 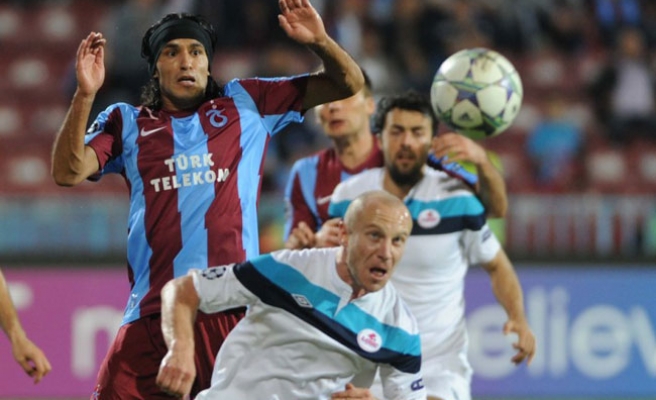 Surprise package Trabzonspor secured a 1-1 draw against Lille thanks to a late Gustavo Colman penalty as they retained top spot in Champions League Group B on Tuesday.

The visitors had taken the lead on the half-hour mark when Moussa Sow slotted the ball past goalkeeper Tolga Zengin from an acute angle after a fine through ball from Eden Hazard.

Trabzonspor, who only made the group stage after Turkish champions Fenerbahce were barred in connection with a match-fixing investigation, are in first place with four points ahead of Inter Milan on three while Lille are third with two points.

"I think we showed a really good performance in the second half," Trabzonspor striker Halil Altintop told Turkish TV.

"We gained one point and I hope as a team, because as I said a lot of new players have joined Trabzonspor, we will carry on like this, become a real team in the shortest possible time and realise our targets."

The Turkish side came into the match on a high having stunned 2010 European champions Inter by beating them 1-0 at the San Siro on matchday one but they were slow off the mark.

Both teams struggled to find their feet, in fact, and the first shot at goal did not come until the 21st minute when Trabzonspor midfielder Didier Zokora fired over the bar.

However, Lille looked in control after their Senegal striker Sow put them ahead with their second attempt on goal.

The second half picked up with several early chances at both ends although Trabzonspor made the biggest improvement and looked the more potent team, having 60 percent of possession.

The home side's Serkan Balci fired over the bar five minutes after the break before Colman was denied by the French side's goalkeeper Mickael Landreau minutes later.

Colman did score 15 minutes from time, though, by tucking the ball away from the penalty spot for his first goal in European competition to salvage a point for the hosts.

"We lost two points tonight," Lille coach Rudi Garcia was quoted as saying on the UEFA website (www.uefa.com). "We had several chances to make it 2-0 but we did not use them. It's really a pity because it was probably a key game tonight."